Lou Castel on other actors 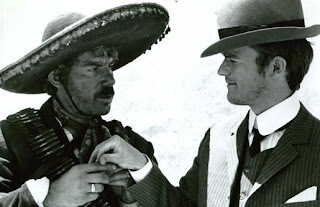 From A Conversation with Lou Castel by David Pellecuer translated by Aïcha Bahcelioglu
DP: Did you talk with your acting collaborators — such as Gian Maria Volonté, Jean-Pierre Léaud or Klaus Kinski — about these acting questions?
LC: Never! I had a clash with Volonté at the end of Quien sabe? (A Bullet for the General, Damiano Damiani, 1966).
With Léaud, too, because there was a tremendous tension. The way he cuts himself off, I think it spreads violence around. It's not necessary to go that far in order to act well. Volonté and I had a clash while rehearsing the last scene of Quien sabe? I was walking on tables, taking liberties with the text when saying my lines. He said, “This is not exactly the text”, and I got upset. He demanded a method a bit closer to theatre. It wasn't much, really, but it's true that things don't go any smoother after a clash. I met him later, when I was expelled from Italy because of my political opinions. He came to give his support, it was just before I took the plane to Sweden. He insisted on saying that he was for the Communist party, while I was far-left.
He also refused to go to Cannes in 1972, in sympathy with Pierre Clémenti who was in prison, and with me who'd been expelled — and yet he had two pictures in the Festival. Such convictions go beyond arguments between actors, and deserve respect.
DP: What about Kinski?
LC: I think we had a mutual, unspoken fellow-feeling, but never a real conversation. And I never talked about work with Clémenti, either. I think it's an aspect of our isolation. It's within the framework of a film that our social relations took place.
Posted by William Connolly at 8:19 AM