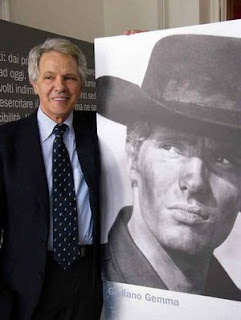 Giuliano Gemma: I could grasp Duccio Tessari's brand of irony because he's someone who has superior powers of communication and can make you understand what he wants perfectly. It was easy enough to grasp. Besides, I too, by temperament, have a certain sense of humor; I'm very much on the same wavelength as Duccio. In fact I've always liked comic roles, of the EVEN ANGELS EAT BEANS variety. During ARRIVANO I TITANI (aka SONS OF THUNDER, aka MY SON THE HERO), Tessari presented me to the producers with the idea of using me for this film. He's never said it to me, but I suspect he had me in mind while writing it, because I was the first person auditioned, and he immediately chose me and rechristened me Montgomery Wood.
At that time, only Leone's FISTFUL OF DOLLARS had been released. The difference between our Western and his was that ...Ringo was very anti-mythic, very ironic, whereas Leone's film was very violent, much cruder. I've known Sergio for years, but we've never worked together, the opportunity has never arisen. Obviously he does films with an American feel, and so he uses Americans... Personally, even before arriving at Ringo, I was already a fan of Westerns (as all boys and men were at the time, I believe), and I'd seen them all. One with Kirk Douglas - MAN WITHOUT A STAR (1951)- particularly took me because he did some incredible moves with his pistol. So a month before starting to film, I practiced all the things he'd done in that film, and it was very useful to have that as a model, because there was nobody here who could have taught me. Westerns were still a total novelty for us, a question mark. It was a lot of work learning how to do the proper walk as well. This is something I practice to this day, because I naturally move in small quick steps with my feet turned out, not a pretty sight. It's a defect due to athletics, a result of doing gymnastics, which has left me with a duck-walk. By now, though, it's just a lingering professional headache, and as soon as the clapper comes down I concentrate on keeping my feet turned in, and walking slowly.
Posted by William Connolly at 12:08 PM