Robin Hood Was A Commie! 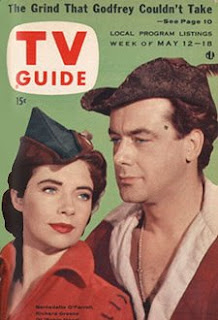 From HOLLYWOOD EXILE or how I learned to love the blacklist
A Memoir by Bernard Gordon
"The conditions controlling the blacklist in television were not precisely the same as at the film studios. Because in those days so much television programming was produced by smaller independent venture operators and was not concentrated in the hands of a few major studios, it was easier to slip in, find producers who wanted good work done cheaply. Such people felt less vulnerable to the proliferating pressure groups that, with publications like Red Channels, made it their business to expose any blacklisted writers who might be working, or, for that matter, to expose anyone they considered left-wing, whether Communist or not. With writers working at home and having no contact with studios, it was easier to conceal identities by using people who for reasons of principle, friendship, or money were willing to act as fronts for the real writers. Increasingly, this did occur. My friends Alfred and Helen Levitt worked quite steadily under the aegis of their good friend Jerry Davis, who took credit as both writer and producer of many shows. This was true even more so in New York, where the media was more scattered than in our company town. Writers like Abe Polonsky, Walter Bernstein, Ring Lardner Jr., Ian Hunter, and others eventually began to work quite regularly. Interestingly too, after a time a very progressive woman with access to funds, Hannah Weinstein, started a serious studio operation in London where she produced the successful Robin Hood series exclusively using blacklisted writers, many of them the same writers who had been working in New York."
Hannah Weinstein was born on June 23, 1911 in New York City and has no credits before The Adventures of Robin Hood in 1955. The success of that show led her to also executive produce
Colonel March of Scotland Yard with Boris Karloff,
Sword of Freedom with Edmund Purdom,
The Adventures of Sir Lancelot with William Russell,
The Buccaneers with Robert Shaw,
and The Four Just Men with Dan Dailey.
After the conclusion of Robin Hood in 1960, she posted no known credits until 1974, when she produced CLAUDINE with Diahann Carroll and James Earl Jones. Her last two credits were for the Richard Pryor movies GREASED LIGHTNING and STIR CRAZY.
But she also produced daughter Paula Weinstein, who has produced dozens of movies including THE FABULOUS BAKER BOYS, CITIZEN COHN (for HBO), THE HOUSE OF THE SPIRITS, TRUMAN (for TNT), LIBERTY HEIGHTS, SOMETHING TO TALK ABOUT, THE PERFECT STORM, BLOOD DIAMOND and RECOUNT (for HBO).
Hannah Weinstein died on March 9, 1984
Posted by William Connolly at 10:31 AM