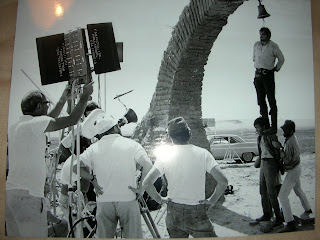 by Nighteagle
Tonino delli Colli: Leone used to shoot a humongous amount of film. He would shoot a scene from different angles, using different lenses. The magic was done then during the editing phase. There, and only there, he selected what he really liked.Editing lasted much longer than shooting the movie. In ONCE UPON A TIME IN AMERICA we shot 300.000 meters of film.The editing took 6 months! THE GOOD THE BAD AND THE UGLY was finished at 5 o´clock in the early morning of the day when its first grand showing was scheduled. The distributors from all over Italy had flown into Rome to try to get copies! And what a memory Leone had! Sitting with Baragli in the cutting room, he remembered each and every take, every detail.... for example in one take, there was a piece of paper on the ground at about 50 meters distance from the camera, he remembered that and discarded that scene. I told him..Sergio, nobody sees it! And he: ..don´t care, I know that the paper is there! He was a maniac of precision, indefatigable, suffocating sometimes with his excess of attention to the particular... but in the end , you see the results, he was right! One other example: he was sitting high in the air on the chapman while shooting one scene with a crowd in ONCE UPON A TIME IN AMERICA. Suddenly he starts shouting, pointing at a person in the far distance:...get him out of here, this idiot,...he looked into the camera!! This was Sergio, demanding but unforgiving with himself ,too. He was at the set location BEFORE everybody else. In ONCE UPON A TIME IN AMERICA, he was on the set a 7 o´clock in the morning, when the drivers were scheduled for 7.30. He started complaining, walking restlessly up and down...where are the drivers? He lived inside his own world and assumed that everyone else would perceive his world view, even without verbal communication.
Posted by William Connolly at 7:31 AM