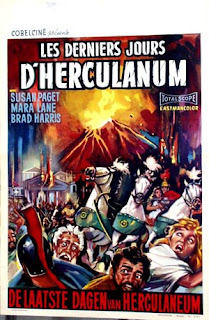 Gianfranco Parolini: I finished GOLIATH AND THE GIANTS and the producer was very pleased, because it made money too, with Brad Harris in an early role. Brad Harris hated Malatesta because he'd caused him to break a leg. When I met him, his leg was all plastered up. Malatesta made him do stuff he shouldn't have been doing. He had his leg in plaster and I said "Brad Harris ? Nice to meet you,I'm Gianfranco Parolini." (I wasn't Frank Kramer yet). From that day on we became great frlends, as close as brothers. I helped hlm finish the film with his leg in plaster and no one noticed on screen. So, practically... We're still friends today. Long live friendship! He had a face that easily... took on the hieratic characteristics of the period. He was very well suited to those kind of historical roles. With a beard he was perfect. If he had horns, he'd look like a buffalo !
Since the producer and distributor had discovered... someone who saved time, respected the budget and didn't overspend, they said: "Why not make two (movies) together ? The renters want it." So then I made SAMSON and THE FURY OF HERCULES at the same time! Right after these two films, I made THE OLD TESTAMENT. Jewish architecture on one side, Roman on the other! And 79 A.D., or THE DESTRUCTION OF HERCULANEUM. A thousand people in armour went past the camera. They took off their helmets and put on turbans... Reverse shot Jerusalem! I used the same extras.
I drink to the health of the victor and the glory of the vanquished!
Posted by William Connolly at 6:17 AM