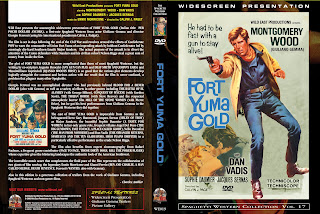 Giuliano Gemma: UNA PISTOLA PER RINGO (A PISTOL FOR RINGO) cost 115 milion lire it seems to me, and Ferroni's PER POCHI DOLLARI ANCORA (FORT YUMA GOLD) 195 million, a film that then went on to make three billion. So, Westerns were doing colossal business, especially if you consider that tickets still cost just 500 lire in those days. PER POCHI DOLLARI ANCORA was shot in twenty-eight days. One would leave Rome at five in the morning, and be on location at Manzara, all made up and ready to film at seven because it was winter, and the light wasn't any good by three in the afternoon. I think it was the first film for Turchetto and Montanari, the producers. I believe one of them had been an accountant at a firm, and the other one a lawyer. They'd already had dealings with film, though not as producers, and they're among the few from that period still involved in production. I've never worked with them again. I didn't like them at all. They'd show up on the set, look all around, rap you on the head, as if to say " My God, what are you doing?!" They didn't understand a thing, they just flapped their jaws. They wanted to teach me how to shoot a pistol! And, when I asked them if they knew how to shoot a gun, they responded no, they didn't. They believed so little in that film that it's been claimed they were the first people out the exit, and that later they had to eat their words.
Posted by William Connolly at 4:58 PM