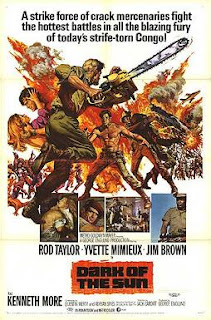 Most celebrated as a Director of Photography for directors Michael Powell on BLACK NARCISSUS and THE RED SHOES, Alfred Hitchcock on UNDER CAPRICORN, John Huston on THE AFRICAN QUEEN, Laurence Olivier on THE PRINCE AND THE SHOWGIRL and Gabriel Pascal on CAESAR AND CLEOPATRA, Cardiff also had 15 credits as a director. THE LONG SHIPS was a big favorite of mine as a kid, but DARK OF THE SUN, aka THE MERCENARIES, was a big favorite of mine as a teenager. After making an horror film in 1974 on which Brad Harris was an associate producer - THE MUTATIONS, aka FREAKMAKER, he never directed again - returning to the role of cinematographer. He died at the age of 94 after a long and accomplished career - but he'll always be important to me as the guy who moved me to want to kill and then to question the impulse in DARK OF THE SUN.
Posted by William Connolly at 10:41 PM