Gordon Mitchell on Demofilo Fidani and the Cave Film Studio 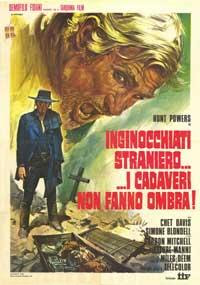 Devin Kelly: More than any spaghetti western director, you've worked with Demofilo Fidani on a number of films, including COFFIN FULL OF DOLLARS (1970), STRANGER THAT KNEELS BESIDE THE SHADOW OF A CORPSE (1970), DJANGO AND SARTANA ARE COMING...IT'S THE END (1970), LOBO THE BASTARD (1971), and BALLAD OF DJANGO (1971), Why did you choose to do films with Fidani so often? Was he a good director to get along with?
Gordon Mitchell: Well to be very truthful with you I worked with him on a couple of other films, but I built a film studio in Rome and I did things people couldn't believe that I did, because no one would think. Here's a stupid American making a film studio. To have a film studio you have to have all kinds of stuff according to the laws of the Italian government. And you must work in Italian film city or laboratories that is recognized by the government and you have to come up to all the rules and regulations, and la, la, and nobody did think I could do it. Well to make the story short, I did it. You come work in my studio, you will get your money from the government. I mean they give you a percent of your money loans. You work in one of the studios recognized by the government. Well, Fidani was my first customer, and he made many, many westerns with me up in my studios, up there in Rome. And that's why I did it, because he kept working (laughs) and doing the films. I would say he was very, very original and he knew how to take parts from one film and put them onto another one, and another one, another one, and another one. Basically that was the reason I worked so much, because he'd do a lot more films in my production place than most of the other studios.
Posted by William Connolly at 11:24 PM