Corbucci on Musante and Palance 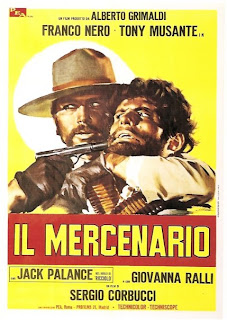 Sergio Corbucci: When Tony Musante signed on for the film, he was a still a minor actor. He'd done something for television that had gone very well, but he'd never tried cinema, and in fact he brought with him the anxieties typical of all actors who have come out of the school of acting of Strasberg. If I told him to go out of frame in one shot, or to return into frame in another, or just to sit on the ground, it was a drama, because he had the tic of "motivation", and he'd begin to ask me: "Why am I doing this? What am I feeling?", and then he'd want an hour to prepare, to concentrate!
Musante's of Italian ancestry. Jack Palance, instead, is of Russian heritage, and like all Russians he was very nice. He spoke four languages quite well, Italian among them. He was only a tough guy on the surface. He was actually very sweet by nature. If you didn't know him well, he was very remote, timid, morose. Self-conscious about his onscreen roles as villain. He'd recount how many times someone would bump into him in Hollywood trying to provoke him, saying: "Hey, since you're such a big tough guy up on the screen, let's just see if you can go a round or two with me." He loved painting, he made the round of the museums. For him movies were just a way to make money. Our system of working alienated him, even if he enjoyed our inventiveness. For instance, he didn't understand, like nearly all the foreign actors I've worked on, why, over here, we dub almost everything.
Posted by William Connolly at 11:11 PM