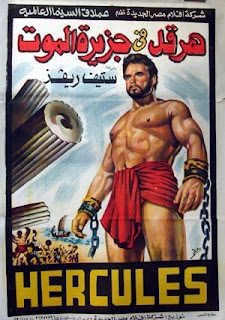 The Perfect Vision: What was the shooting schedule on Hercules?
Steve Reeves: Three months. Most of my pictures were about three months. In the case of Hercules, the picture was over, but my contract said I had to stay around in case they needed some retakes. I waited about three days, then shaved off my beard. Then they called me and said they would need a day of retakes. But they added, 'We don't have any money. You have to do it for nothing.' I went and talked to Francisci, and he said, 'If you're my friend, you'll do it for nothing.' And I said, 'If you're my friend, you wouldn't ask me to do it for nothing.' Eventually, they agreed to pay me. 'We'll have the money there when you get on the set.' I went there and got my goatee and mustache pasted on, got into my costume, ready to shoot, and the money didn't show up. So I sat down in a yoga position, pretending to put myself in a trance. I played the part of a god, and the clouds actually started coming in so that they couldn't shoot. So they said, 'We'll have the money here by noon,' and sure enough, they arrived with half the money at about 12 o'clock, and the clouds parted and we did half a day's shooting. The next day they came on the set with the rest of the money and that was it.
Posted by William Connolly at 10:39 PM