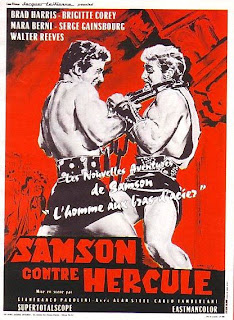 Gianfranco Parolini: Serge Gainsbourg was someone I liked very much. I was given him by the French co-producer, a certain De Nesle who owned "Le Comptoir Francais du Film Production". And he came to do the films (SAMSON and FURY OF HERCULES). He thought he was God Almighty and one day he indulged himself by lighting a cigarette with a Yugoslavian dinar. They arrested him! I went through hell to get him out of jail! And tomorrow... it will be Samson's turn. He didn't realize what he'd done. This is... a kind of indication of the man's character. The rest went okay, nothing out of the ordinary.
Posted by William Connolly at 11:41 PM