In praise of Polly Shannon 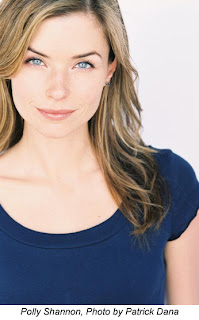 Happening upon a 1999 Canadian TV Movie directed by Eric Till called THE GIRL NEXT DOOR, I first saw Polly Shannon and she knocked me for a loop, even though the rest of the movie didn't. Shortly after, there she was on a Showtime series called Leap Years. Oddly, though the show featured quite a bit of female nudity, Polly remained covered up - even though her story line was about an actress who fought against and then finally gave into doing nudity for a film. (This show was also the first time I noticed Garret Dillahunt, who would go on to memorable parts in Deadwood, John From Cincinnatti, Life, Terminator: The Sarah Connor Chronicles and - unfortunately - the recent remake of THE LAST HOUSE ON THE LEFT.) As Polly was not covered up in THE GIRL NEXT DOOR, nor in the episodes of The Outer Limits and The Hunger I eventually found, the reason for her non-exposure in Leaps Years remains a nagging mystery. The lack of nudity in STONE COLD, the first of Tom Selleck's Jesse Stone TV movies was hardly surprising as the show was made for CBS-TV. Luckily, the next Jesse Stone installment was, more or less, a prequel, so Polly returned for NIGHT PASSAGE. A former model who left the profession after being advised that she should have a rib removed, Polly has accumulated an impressive list of credits in the 16 or 17 years she's been an actress, even participating in the documentary CAMP HOLLYWOOD about Canadian performers descending to the Los Angeles area ever year for U.S. Network TV's "Pilot Season". She was nominated for a Gemini Best Performance by an Actress in a Leading Role in a Dramatic Program of Mini-Series for THE GIRL NEXT DOOR in 1999 and then again in 2000 for THE SHELDON KENNEDY STORY (which I've not been able to see). She was nominated in 2003 for a Canadian Comedy Award "Pretty Funny Female Performance" for MEN WITH BROOMS and received, along with three other cast members, a Special Jury Prize from the WorldFest Houston in 2008 for the film MIRANDA & GORDON. But her most startling appearance for me was showing up with a Southern accent on an episode of Cold Case in December 2006 just after I caught her on a repeat of a episode of CSI: Miami.
Posted by William Connolly at 7:05 AM