Duccio Tessari on CARTHAGE IN FLAMES 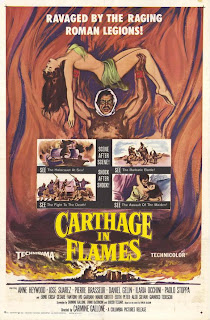 Duccio Tessari: Carmine Gallone was a delicious man who told you every two minutes: "my good person, my darling, my love, my treasure" and he lived in a villa above Grottaferrata. Already, by the time of CARTHAGE IN FLAMES, he must have been 196 years old but he was unchanged by time, classic like the Pyramids of Egypt.
One morning I went to a reunion with him and at the moment of shaking the martini he grimaced because of a pain in his arm. So I asked him: "What is it Carmine, an attack of arteriosis? "
And he calmly replied: "No, no, it's just that last night I put a waltz on the gramophone, I took my wife in my arms, and we danced for the whole disk, then I lifted her off her feet and carried her upstairs to the bedroom..."
He truly worked like a superman; his tirelessness, his physical strength, his indefatigability has become proverbial. As also, in a certain sense, his easy nature.
There is a moment in the screenplay (of CARTHAGE IN FLAMES) where Scipio has to command the attack, and Carmine quietly accepted a gag that I had suggested to him - that in the next take, when Scipio gives the spirited cry "Rome or death," the Legionaries should respond in chorus with "Rome! Rome!" And after he had shot it, he kept it in the film.
Posted by William Connolly at 4:07 PM