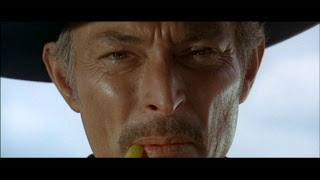 Sergio Leone: The theme of FOR A FEW DOLLARS MORE is friendship. The rapport between two so called negative characters: one of them young and vigorous, the other just this side of old age. Creating this relationship, I wanted to go beyond FISTFUL OF DOLLARS: in some fashion, to outdo myself. Lee Van Cleef had that physique, that way of moving which was perfect for the role of Bounty Killer. The Bounty Killer is a very ambiguous character in the old west, perhaps the most ambiguous of them all, for he demonstrates a law of the West and of America itself: that in order to live one must be inclined to kill. In the film, the relationship between these two characters was crucial, also due to the choice of just the right pair of actors.Lee Marvin seemed prepared to accept. Once again, I'd thought of Fonda, but he was unobtainable. But then, just as
I was flying to America to have him sign the contract, Marvin dealt me a cruel blow, committing instead to another film, CAT BALLOU, which went on to win him an Oscar. Then I recalled an actor who had struck me in small roles in HIGH NOON, and THE BRAVADOS. It was very difficult tracking him down, no one knew what had happened to him. His photo no longer appeared in the actors' annuals. Finally, I contacted a smalltime agent, who told me Van Cleef wasn't working anymore because he'd been in a clinic for alcoholics for three years, and all the studios had slammed their doors in his face upon his release. And so he'd changed his career. Now he painted and did carpentry, but if I wanted to meet him, the agent would have him come by to my hotel the following day. And so it came to be. He arrived on a day of torrential rain. He had traveled a great distance. He wore an old dirty raincoat. He tapped lightly on its buttons. From his raised collar emerged that head with its short-cropped salt and pepper hair, that face resembling a falcon's. He was even better than the character I'd dreamed of! I immediately had a check written up for a sum that I don't think was more than a thousand dollars.Lee, who didn't yet understand he was to be the costar in the movie, said to me: "You know, I'm not sure I'm convinced it's worth returning to films occasionally just to do two or three scenes. I'm deeply involved in my career as an artist. Somebody just paid me seventy dollars for a piece of work, and I don't want to be forced to give the money back. I don't want to jeopardize my career." When I gave him an advance of 1000 dollars, he almost fainted! I also remember with great tenderness Christmas Eve two years later. Van Cleef, famous by now thanks to the success of the film, wanted to offer me dinner at a Chinese restaurant in New York. His wife, a former nurse who had taken care of him during his spell of alcohol poisoning, joined him. He had just bought her a splendid wrap. Almost with tears in his eyes, he told me: "This fur, the opportunity to take you out to this restaurant, the life that we live now, all this we owe to you. You gave me the chance to redeem myself in every sense. Thanks to you, I now earn 25,000 dollars a film, and I do one right after another. Before meeting you, just two years ago now, we were struggling heroically to pay the light bill."
Posted by William Connolly at 10:45 PM