How A TOWN CALLED BASTARD? 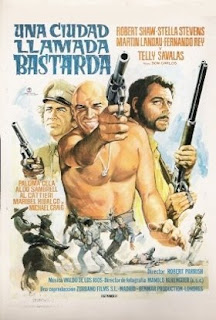 From HOLLYWOOD EXILE or How I Learned To Love the Blacklist by Bernard Gordon
Bernard Gordon first worked in Spain when Philip Yordan hired him as a writer to work on projects at Samuel Bronston's company and at Yordan's Security Pictures. Both of those concerns ended, but then Yordan made a deal with Cinerama Releasing and he brought Gordon with him. The deal with Cinemara ended with KARAKATOA EAST OF JAVA, so Gordon returned to Hollywood to try to find work. Meanwhile, Yordan set up a new film, ROYAL HUNT OF THE SUN, "uncharacteristcally, he was for the first time risking his own money on a production without other financing and without a release deal."
"After I had left Madrid, while Yordan was still in Europe working on ROYAL HUNT OF THE SUN, he had also been developing new contacts and financing sources in England. His new associates were Ben Fisz (pronounced 'Fish'), a shamelessly extravagant promoter with overweening filmmaking ambitions, and Bobby Marmor, a pleasant, low-key man who had made a fortune in London real estate. Fisz interested Marmor in the romance of filmmaking; Yordan plugged into this combo because Marmor had money and excellent financial connections with the London merchant banks. Yordan could provide the Hollywood contacts and expertise plus invaluable Madrid contacts and know-how. With the money he had earned from Bronston, he was also in a position to contribute his share to the creation of a small studio in or around Madrid, the site of their new empire.
"To my surprise, this dream seemed to be evolving credibly. With money supplied by Marmor and Yordan, and with Yordan using his film and legal connections in Madrid, they acquired a property just outside Madrid. Working on and off with my own projects, I was startled to learn that they had developed the lot with a few buildings for offices and dressing rooms. A warehouse was to serve as a sound stage, and they had constructed a modest Western street on top of the hill dominating the property. Yordan, commuting back and forth to London and Madrid, showed me the script of the first film they planned to shoot. Under Ben Fisz's supervision, a writer in London had scripted A TOWN CALLED BASTARD. Yordan was supposed to rewrite and cure its problems. He gave me the script to read. I wasn't asked to participate, so I refrained from any criticism of the work, but since this looked like a 'go' project, I felt left out. I speculated on the meaning of this. Did Yordan feel he could handle the rewrite on his own without my help? Or had he not asked me because Bronston wasn't around to foot the bill for my work? Or did Yordan need to prove to his new partners that he, personally, was the man who could be trusted to deal with all the script problems?
"I kept my mouth shut until Yordan finally asked me, 'What do you think of the script?'
"'It's interesting,' I said, 'though I think it has some problems.'
"Never insensitive, Yordan let it go at that. If I wasn't interested in volunteering comments, he wouldn't ask for them. Actually, the BASTARD script was a bloody, violent, and confusing exercise that, presumably, catered to the booming desire for more and more sensational films. After much travail that didn't involve me, it was eventually made into a film, but Halliwell dismisses it as a 'sadistic Western with an opening massacre followed by twenty-two killings (count 'em). Pretty dull otherwise.'
"Yordan got my attention when he announced, 'They started shooting BASTARD in Madrid.'
"'Who's the director?'
"'Bob Parrish.' Parrish was an American director with many substantial credits who was at the time working principally out of England.
"'Who's the producer?'
"'Ben Fisz is in charge until I get over there.'
"So it was real.
"'You want to go back there with me?'
"'Doing what?'
"'You'll be the producer.'
"I was ready. 'When do we go?'
"'September.' He was unequivocal...
"'How do I get paid?'
"'You won't. Same as me. You'll have a big expense account and own a piece of the pictures along with me. You'll make a lot more than salary that way.' I had my doubts, but the way things were going for me in Hollywood, I couldn't say no. He went on. 'I have to get another script ready to shoot in September.' It was early summer.
"'I'm going to work with Milton [Sperling]. He owns a book.' He was referring to paperback Western, CAPTAIN APACHE, which in fact Yordan did work on full-time with Sperling. 'Meanwhile, I'd like you to start working on some scripts. We'll need a whole program.'"
Posted by William Connolly at 6:11 PM