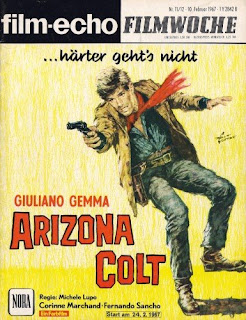 Giuliano Gemma: Besides Tessari's...Ringo, I recall PER POCHI DOLLARI ANCORA by Ferroni (FORT YUMA GOLD), and then two films I made with Michele Lupo: ARIZONA COLT and BEN AND CHARLIE, which was later renamed AMICO STAMMO LONTANO ALMENO UN PALMO (approximately: ‘Let’s keep our distance’)...It was a good story about two friends who are can never agree on anything, but are miserable when separated. We shot part in Spain, part in Italy, and it was a well-made film. I found Lupo well suited to this sort of pop-adventure movie. He has the right rhythm; the right feel for this sort of thing.
Posted by William Connolly at 6:04 PM