The director of SEVEN GUNS FOR THE MACGREGORS 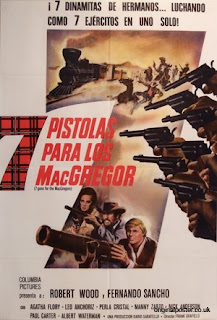 Franco Giraldi: Coming from Trieste to Rome and falling into Cinema, as one did in those days, I worked as an assistant director (for Pontecorvo, Lizzani, and especially Peppi de Santis who was my master [Giuseppe De Santis, best known for showing the world Silvana Mangano's milky thighs wading amidst BITTER RICE], I immediately felt like an outsider. The cultural baggage I carried with me from Trieste wasn't of any use, it didn't have anything to do with that kind of cinema. So, maybe out of timidity, insecurity, fear, maybe from my native Triest-ine tradition of learning a job from the bottom up, I sought to learn my trade well, while serving my apprenticeship. After a while, I began to get calls for second-unit work. That means filming disaster scenes, gun battles, explosions for somebody else's movie. I found this amusing, and it gave me a certain independence, and I did it with the carefree thoughtless that characterized me in those years. So, awaiting my debut as a director in the "first person", I did some films as second-unit director, including some scenes for FISTFUL OF DOLLARS by Sergio Leone, those in which the actors -let's say Volonte- did some secondary bit of business, while Leone directed the more basic story, true and proper. (It has been claimed that Giraldi was responsible for the cemetery scene in which Volonte guns down the already dead soldiers.) The completely unexpected success of that film gave me professional leverage, and while Leone was fighting his legal battle with the people who'd produced the film, they asked me to do a Western for them. The only tone I felt I could work in was a "juvenile" manner, partly because I'd been a huge fan of the true Westerns -Ford and so forth, a taste I owed perhaps to fellow Triestean (Tullio) Kezich (esteemed film critic), who'd been the first scholar of the phenomenon. In the other Westerns that I shot, I maintained this kid-oriented tone, full of landscapes, action, and all the possible conventions: little trains, vast horizons etc, etc. Let's say my Westerns are revisitings of the classics, but in a very ironic key.That first movie went very well, it was liked, and even the critics didn't treat me too badly. They were very indulgent in their reviews of SETTE PISTOLE PER I MACGREGOR (SEVEN GUNS FOR THE MACGRGORS). Apart from anything else, the film had the merit of costing very little. The actors were almost all kids from the circus or stuntmen. They had to be given that they had to do lots of crazy bits of business. But I tried to make them act a little, too. The hero, however, was an American, who'd been a male model till very recently. I think his name was Robert Woods. Generally, all those films were shot on crazy schedules. Mine was done in nine weeks, which is nothing for an action movie, where, after all, there's the need for detail work, and for making changes. I shot it in Spain, near Madrid and Granada, because in that genre which was already so half-cocked, I detested the idea of not being able to give at least a minimum of authenticity with plausible looking landscapes.
Posted by William Connolly at 10:18 PM