Gordon Mitchell on THE GIANT OF METROPOLIS 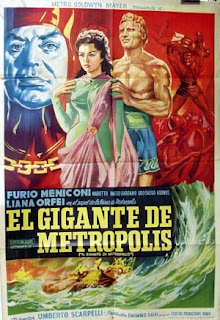 Devin Kelly: Also in 1961, you starred in one of the most popular among Italian peplum films, THE GIANT OF METROPOLIS, directed by Umberto Scarpelli. How was the hype surrounding it's release and what type of box office and business did the film do? Also, how did the role help your career?
Gordon Mitchell: It was Emimmo Salvi's film actually. He wound up doing the film anyway later. Now to be very truthful to you, I had no idea what was happening because as soon as I finished the first film I thought, well in two days before I even finished, they told me, they said you had another film to do and start in two days. But I had no idea all this stuff was happening. This woman (the medium), I guess she told the truth. So immediately I had two days off and I slept I was so wiped out. And then I start to work with Emimmo Salvi and this is where I start a lot of good friendship with Emimmo Salvi. And also Leonviola was very good with Emimmo. I did many, many films with him, and ah, THE GIANT OF METROPOLIS was wonderful. It was a great, great film and I enjoyed it very much.
Posted by William Connolly at 8:39 AM