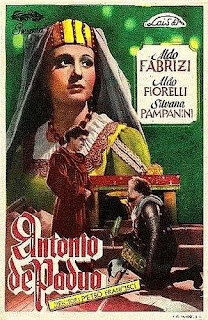 Fiorenzo Fiorentini: With Pietro Francisci, I did ANTONIO DI PADOVA, and many other films like LE MERAVIGLIOSE AVVENTURE DI GUERRIN MESCHINO (THE MARVELOUS ADVENTURES OF GUERRIN MESCHINO), IL LEONE DI AMALFI (THE LION OF AMALFI), LA REGINA DI SABA (THE QUEEN OF SHEBA). They were well-crafted productions, but always financed with so little capital. Even when big productions like the Maciste series came along, Francisci was the man who could always complete the film by spending a tenth of what the others spent. GUERRIN MESCHINO, for instance, was a Swashbuckler (called in Italian: Cappa e Spada - Cloak and Sword) shot with only six horses that somehow he made seem like two hundred. In IL LEONE DE AMALFI, the palace of Saladin was only a model built by Bava, but it looked like an immense Fairy-tale Castle. In short, it is Francisci and (Mario) Bava who created all of these things, both with a love of film and with a skill for cutting costs. The whole of Italian Cinema was rebuilt on these foundations. And it is certain that even today the industry would flourish anew if only these principles were followed.
GUERRIN MESCHINO and LA REGINA DI SABA already contained all the elements of the films of Maciste, they were already fables of that type. As a director, Francisci was punctual and precise and at the screenplay stage had already sorted out all the details that a scene would demand. He was a true professional.
Posted by William Connolly at 5:45 PM