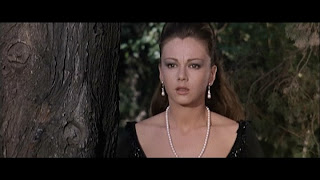 Lorella De Luca: For the last ten years, I've unofficially been the team pinch hitter in my husband Duccio's films. I'd abandoned my own career, true and proper, after the kids arrived, and because doing films had never really agreed with me. But, by common decision, I've always been at Duccio's side when he films, and thus when, as so often happens, a film is an actress short, and they don't want to send off to Italy to fill the gap, the producers come serenading: "Lorellina, come heeere, are you busy?" Duccio never plays a part in this; it's always the producers. And so, when someone asks me today just what it is I do, I respond without hesitation: "Profession: stopgap." In Ringo...I even changed my name. The called me Holly Hammond!
Posted by William Connolly at 10:33 PM