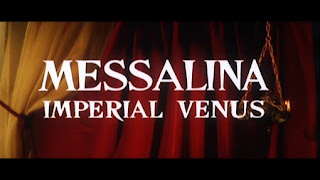 Duccio Tessari: For MESSALINA, VENERE IMPERATRICE, not to be confused with the 1951 version (THE AFFAIRS OF MESSALINA with Maria Felix) but this time by Cottafavi, a friend recommended a very young girl to me who had been at the Academy, saying that she needed some work experience. I needed a Roman slave-girl for a scene of torture; her dress is lacerated with whips and a red-hot iron used to 5brand her flesh. Naturally her skin was protected by a layer of rubber, on which was placed a steel plate, tricked out with a thin strip of veal in such a way that it looked like it was the real skin of the actress. Then this young thing arrived on the set, for her debut in the cinema: she was called Paola Pitagora. The crescendo of the scene was an agonizing scream that she was supposed to utter at the moment in which the iron branded her flesh. Poor Paola, she wasn't from the World of Film, and knew nothing of it. She had come from the Academy with all the baggage of Chekov, Moliere and Goldoni and therefore, despite the direction she was given, continued to give out a very subdued cry, modulated and beautifully enunciated, but that was all. Take after take, it always remained a tiny cry and Cottafavi became angry because he wanted a desperate scream, he needed a desperate scream, and the scene wouldn't work without a desperate scream. This called for a wickedly extreme remedy, and with the next take, I told the two Praetorians to inflict the torture with great force because this time the scene would be perfect. At the desired moment, La Pitagora uttered an anguished cry that came from the torment of her flesh because I, from under the camera, had hammered on her bare foot with all the strength I had. The maximum sadism in these films came from scenes of this type. And the maximum eroticism came from the kiss which was the first stage in the action that indicated that the girl was going to undress, followed immediately by a shot of the actor in whose eyes were to register the excitement of the girl's nudity. Those actors had to have a quality of expression that simulated the eroticism, because in their shot, they saw absolutely nothing, or in the more fortunate cases, a hairy assistant director who continued to intone from the script: "Here, now she undresses, you think that you see her breast, think, think." However, some of these actors just didn't have what it takes, and they appeared on the screen with expressions of total stupidity.
Posted by William Connolly at 10:58 PM