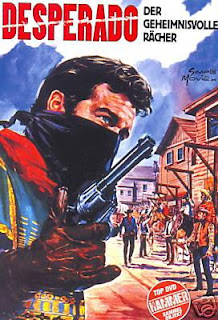 Oberdan Troiani: Luigi Capuana was a Neapolitan who had a good technical background. During the war he'd been a fighter pilot, and had reached the rank of Commander. He was the classic Neapolitan who worked as little as possible. He'd arrive in the morning: "Hey Troiani, I've got to be at the dentist at one." He'd have twenty pages of script to shoot, he would call for his crane, and in one single sweeping movement he'd cover every single one of his cues. We'd finish earlier than projected. When the troupes for the other films would arrive at Cinecitta to begin filming on the same day, they'd find we were already well under way, that we'd finished for the day! I filmed a Western with him that was really rather well made (he was awfully good with those crane shots), a Spanish co-production that came out with a pseudonym attached (Lewis King), even though it was all filmed in Rome or nearby. I think it was called IL MAGNIFICO TEXANO (THE MAGNIFICENT TEXAN). Because of contractual reasons it often happened on these co-productions that the director had to be Spanish and the cameraman Italian (or vice verse). On this one we needed a Spanish camera operator, but the producer didn't want to take risks so I shot it all myself, while the Spaniard stood and watched. John Saxon was the star, an American who later became a producer, I believe. By this time, we Italians had got the feel for this sort of production and we could make these films with incredible speed, and at a third of the price of what they would have cost elsewhere in Europe.
RAMON IL MESSICANO (RAMON THE MEXICAN) was a film directed by Maurizio Pradeaux. He'd been the chauffeur for Emimmo Salvi, a producer during the period of mythological films. Salvi had written the script himself, and had found Pradeaux a financial backer from Bologna. He then wanted to make a 007 type film, Ventotto minuti per tre millioni di dollari, with Pradeaux, but gave up on the project: it wasn't the kind of film you could do on a tight budget. The only way to make budget Westerns was to consistently follow the same well-worn path. Beginning with the horses, always the same horses put through exactly the same paces. And there was always the same saloon, the usual Western village constructed De Paolis-style. The most you could spend for a film like this back then was 120 million. Pradeaux got his start this way, and went on later to direct numerous adventure films.
Posted by William Connolly at 10:50 PM