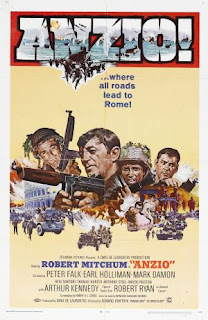 Interveiwed by Julian Grainger
JG: Was there any director you worked with that particularly impressed you?
TH: Um, hmmm. I don't think so. I thought Edward Dmytryk did a good job with our film [THE "HUMAN" FACTOR] except for the first five minutes.
JG: And on BATTLE OF ANZIO too?
TH: On ANZIO he was pretty good. Mitchum at one point decided he wasn't going to shoot that day because he was hung over. He was playing cards with Peter Falk in his trailer with Reni Santoni and one other actor so Dmytryk came to us in our trailer instead - Giancarlo Giannini and another actor who played the sergeant in ANZIO, a very good actor - Earl Holliman. And Dmytryk asked us if we would do our death scenes. I said "Sure". We were shooting right on what was actually a battlefield during WWII and they had the special forces come out there and comb the area for old munitions and mines but... these guys in the trailer (Mitchum, Falk and co.) are using this as an excuse not to work. [They were pretending that] it wasn't safe yet. It wasn't safe for Mitchum's head! And we took a vote, the three of us in our trailer, and I said "Look I've been in the Marines and if the Italian Special Forces have been through this, then the chances are there is nothing wrong and I think this is bullshit." So we took a vote and decided to work. And we had to walk right past the trailer and we saw Reni Santoni giving us the finger – with a big smile as we walked past. All three of us gave him the Italian salute.
JG: ANZIO has a tremendous cast: Arthur Kennedy, Robert Ryan...
TH: But then again it is wasted on the screenplay. It was really lightweight given what it could have been. It's very hack. The way [the screenplay] is constructed.You can forgive a lot of dialogue if it is well 34constructed. And he [Dmytryk] really didn't know how to handle Mitchum, not from a discipline point of view but from a performance point of view. I mean ANZIO isn't about a war correspondent who writes this down, that's too contrived from my point of view. For my money it didn't work.We were shooting the amphibious scenes in Taranto and the first day we were supposed to shoot it Dmytryk called it off because De Laurentiis had decided that we were going to use rubber rifles and here they were practically flopping over. Rubber M1s! So Dmytryk said "That's it. We're not going to shoot until he gets us something real." So Dino had to cough up some more money and give us the real thing. He probably got it from the naval base because he and the Italian commander were buddies. Mitchum was great in ways but he IS a bad boy. The daughter of the base commander, a little Italian teenager, came up asking for his autograph and he said "I'll sign it but I'll sign it on your ass" [laughs]. So she hiked up her skirt and he did. And I thought "Oh boy! If this gets back to the commander we're out of here."
JG: In the ANZIO cast are all sorts of Spaghetti Cinema regulars - did you know Mark Damon?
TH: Yeah, Mark was a friend of mine. He was part of the Mel Welles crowd. I also knew the guy who wrote the screenplay for LITTLE SHOP OF HORRORS, Charles B. Griffith.He's a wonderful person. I knew him [Damon] when I went back to Hollywood too. He was always more of a businessperson than an actor. He was always on the phone to his account man in some brokerage firm in New York. But he became a great businessman.And there was John Thompson, do you know of him?
JG: I know that he worked with Mel Welles and then as a producer for Cannon Films.
TH: John was a good friend of mine. He spoke three languages perfectly and he has been producing a lot of Italian films. And off course Cannon didn't know how to handle him.
JG: Did John Thompson start off as an actor?
TH: Sort of. He was part of my workshop. All these guys were part of my workshop.He was in a play called COMPANY K.
JG: Is John Thompson still alive?
TH: John is still alive and he lives in California and he is back and forth between Italy and California. He's married and he's happy for a change. In fact I brought him as an assistant onto a movie I made because he needed a job. I got him on THE MAGNIFICENT TONY CARRERA.
JG: And Wayde Preston?
TH: Wayde played our commander. And then you had the Brit, a real ex Royal Marine, Anthony Steel. At Taranto we had the Marine Corp. coming in from Vietnam - they were on liberty - and they came to our hotel because they wanted to meet Robert Mitchum. I was with them and we had a ball that night. It was so unreal seeing these spiffed up dandies in their ivory clean, starched liberty uniforms who had just come back from Vietnam. And then there's us, the actors, the fake rangers, drinking it up in the hotel bar still wearing our sandy, grimy uniforms with black under our eyes and everything, like we'd just come back from a long day's war.
Posted by William Connolly at 10:34 PM