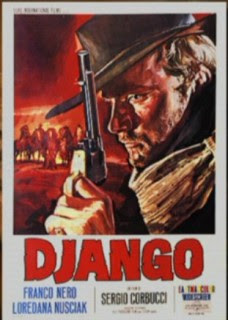 Sergio Corbucci: DJANGO was the first Western that in a certain manner shows the impact of Sergio Leone's influence. I'd had some success with MINNESOTA CLAY, but it hadn't broken any records as FISTFUL had. Planning another Western, any film one might have come up with ran the risk of imitating FISTFUL, something I strenuously wanted to avoid. So then, in order to strike off in a new direction, I figured that if he had done a film full of violence but decidedly dominated by sunlight, I'd do one instead -influenced somewhat by Kurosawa, a picaresque Western, somewhat Noir-ish, an anti-Western par excellence, in which instead of riding on horseback, the hero would travel by foot; he would move through cold rather than heat; instead of struggling with sweat and dust, he'd combat mud and snow...
With this film, I launched a new actor, Franco Nero, who had done nothing at this point. I found him in an acting agency, where his photo had been gathering dust for who knows how long. DJANGO was a great international success.
Pier Paolo Pasolini once told me that when he'd visit an African village, or some other godforsaken place, as soon as he was recognized as an Italian, he'd hear murmurs of "Django", because it was one of a mere handful of films at the time that reached all the movie theaters worldwide.
DJANGO was my least expensive Western, a film shot adventurously, so much so that halfway through I wanted to abandon it. I was convinced that things weren't going well, that I was screwing up big time. The budget was exceedingly modest, with not a single name actor. We shot part in Spain, part in Rome, and Franco Rosselini produced, his debut in that capacity. At a certain point we were just about down to our last lira. And here in Rome it was very difficult to get the mud we needed. As a result, there were no crowd scenes; we shot only in abandoned and uninhabited places. Yes, there was that one scene with lots of horses. I was nervous about this, I didn't really know what I was doing...
Franco Nero, in reality Sparanero, was an extremely handsome young fellow from Parma. He had a pair of big blue eyes, and tremendous will power. I chose him for DJANGO over Mark Damon, an American actor with whom I made another Western for Metro, JOHNNY ORO. I liked the American type of face, its personable quality, and its seriousness.
Today, he (Nero) is somewhat remote, but back then he was very friendly and always eager to please. While we were filming DJANGO, a film in which he appeared in every scene, John Huston called him, wanting to give him a part in THE BIBLE, but he needed an actor who spoke English. Franco didn't know a word, but he studied diligently with a crazy tenacity, and in less than a week he could carry on a simple conversation. He was a very shy kid, very nervous. Afterwards, he was called to America, where he became acquainted with Vanessa Redgrave, and his true career began there.
Later on, I made two other films with him, IL MERCENARIO (THE MERCENARY) and VAMOS A MATAR COMPANEROS, the latter with Tomas Milian, with whom he fought constantly. Tomas, this Cuban émigré who then found his fortune playing Roman dialect parts, was a different personality-type (than Franco): extroverted, full of song, half mad, entertaining. I insisted he dub himself, because I found his accent lovely and very convincing for South American and Mexican roles.
And he was excellent. Besides Nero, I also launched Burt Reynolds, as well as Tony Musante in IL MERCENARIO.
Reynolds did his first film with me, NAVAJO JOE. De Laurentiis had proposed an American actor who I didn't want. I said: "Let's try someone totally new." and I went leafing through pictures at the Actors' Guild, where I found his photograph. Then I remembered I'd encountered him earlier in Spain. He'd arrived on the set to say hello to Eastwood, who was his friend. At the time he was a stunt double for Marlon Brando, and he exploited his acrobatic
abilities. I chose him without even testing him.
Posted by William Connolly at 10:41 PM