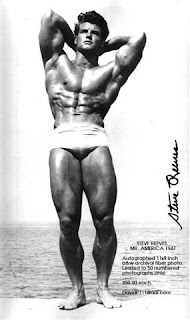 From: ENCYCLOPEDIA OF MODERN BODYBUILDING
by Arnold Schwarzenegger with Bill Dobbins
The winner of the Mr. America title in 1943 was a man whom many believe to be the first truly modern bodybuilder. Clarence (Clancy) Ross's physique would not look out of place on any stage today - wide shoulders, flaring lats, narrow waist, good calves and abs. By this time the distinction between lifting weights purely for strength and training with weights to shape and proportion the body had been clearly made. The bodybuilder's physique, as opposed to other types of muscular development, was now recognized as something unique.
However, bodybuilding still remained an obscure sport. No champion was known to the general public - that is until Steve Reeves came along. Reeves was the right man in the right place at the right time. He was handsome, personable, and had a magnificent physique. Survivors from the Muscle Beach era recall how crowds used to follow Reeves when he walked along the beach, and how people who knew nothing about him would simply stop and stare, awestruck.
After winning Mr. America and Mr. Universe, Reeves made movies and became an international star with his portrayal of the title roles in HERCULES (a role that both Reg Park and I were later to undertake for the movies), MORGAN THE PIRATE and THE THIEF OF BAGHDAD. As far as the general public was concerned, in the 1950s - except for the perennial Charles Atlas - there was only one famous bodybuilder: Steve Reeves.
Probably no human being in the history of the planet had ever achieved the level of development of men like [John] Grimek, Ross, and Reeves. Bodybuilders began to learn things about the physical potential of the body that even medical scientists could not have predicted. Soon there were more and more great bodybuilders coming along every year - Bill Pearl, Chuck Sipes, Jack Delinger, George Eiferman, and one of my great idols, Reg Park.
[Gordon Mitchell told me about how during the old days of Muscle Beach, he and other bodybuilders would hang around with Steve, until Reeves decided which of his female admirers would accompany him that evening - afterwhich Gordon and the other men would try their luck.]
Posted by William Connolly at 8:19 AM