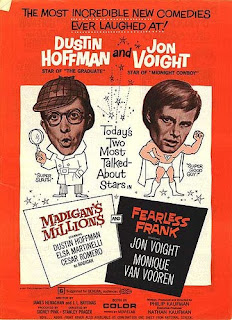 From: SO YOU WANT TO MAKE MOVIES
My Life As An Independent Film Producer
by Sidney Pink
Back in Rome, the fighting began again as soon as my absence was noted. This time, Stanley tried to direct Dustin in how he wanted a tender moment with Elsa to be played. Dustin wanted no part of that and repeatedly played it his own way until, in total frustration, Stanley closed the set to await my return. Again we lost another day of work.
When I arrived at the set and found it closed, I was as angry as I have ever been. I rued the day I first saw Dustin Hoffman, and I could find no solution other than to finish the picture as best I could and get him out of our sight. By my constant presence and supervision of the set, we were able to get back the three days we were behind and finish our principal photography.
Dustin was still committed to another two weeks of dubbing in the studio. He was at the hotel awaiting his first call when I received a phone call from Mike Nichols. Mike was familiar with Dustin's work, but he wanted to know whether I felt Dustin was good enough to play the lead role in a picture he had signed to do for Joe Levine, THE GRADUATE. He explained the demands of the part and asked if I felt Dustin could play it. Disgusted as I was with the unprofessional way in which he acted with us, I had to tell Mike that in my opinion Dustin was so talented I honestly felt there wasn't a role written he couldn't play, then jokingly even Joan Crawford! Later events and TOOTSIE proved how right I was!
Mike asked if I would release Dustin for about ten days so he could fly back to California to test for the part. I told Mike we needed Dustin for dubbing in Rome for another two weeks, then I could release him. But Mike needed him immediately in order to close his casting and meet the start deadline imposed by Joe Levine. He added he would be personally responsible for Dustin's return to Rome to complete our work.
I told Mike that my experience with Dustin made me almost positive he would not return, but Mike insisted he would guarantee it. Against my better judgment, I let Dustin leave. I was right; Dustin never came back, and Mike was forced to pay for the studio, the dubbing crew, and Mitch Grayson's fare and expenses to do the work in Hollywood. Dustin was most uncooperative about even doing that, and Mitch had a rough time finishing. I never heard from Dustin again, nor did he ever attempt to help make the picture better or more playable.
I have never before voiced any of this but I think I am entitled to tell the story now. I recognize and appreciate Dustin Hoffman's great talent, but we did not deserve the treatment he accorded us. We gave him his start in motion pictures; we gave him the opportunity to appear in THE GRADUATE; and we paid him for his best efforts, which we never received. When our picture was released after THE GRADUATE had opened, his only comments were destructive. He disowned the picture by stating he was forced into doing this lousy European stinker. I wonder what his excuse is for ISHTAR, his bomb with Warren Beatty. I have never known anyone who was as ungrateful, but I still wish I had secured that three-picture option.
Posted by William Connolly at 8:25 AM