Sidney prepares for the end of the deal with Westinghouse 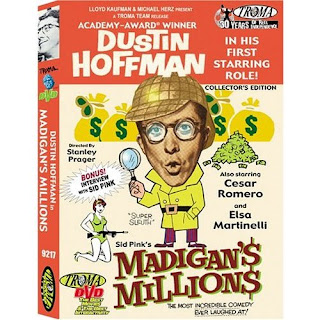 From: SO YOU WANT TO MAKE MOVIES
My Life As An Independent Film Producer
by Sidney Pink
MADIGAN'S MILLIONS proved I made a mistake in signing Stanley Prager to a two-picture contract, but I was unable to get out of it. Stanley was a very sincere and lovable man, but he never learned how to use a camera or to really understand filming. On the stage he was great, and his own sense of timing gave him the ability to direct actors and action, but he was lost in a medium that uses cutting and close-ups to set the timing and pacing of comedy and drama. A movie director must know exactly what his next move will be in order to set a rhythm for his work. Some directors never learn that, and Stan was one of them. The enormity of my mistake in selecting Stanley Prager over Mike Nichols was amply demonstrated by the success of THE GRADUATE and other Mike Nichols films. MADIGAN'S MILLIONS was not one of our best efforts, and after THE BANG-BANG KID, Stanley never made another film.
[What is curious about Sidney's version of events is that THE GRADUATE was not Mike Nichols' first movie; he had made WHO'S AFRAID OF VIRGINIA WOOLF? the year before. Did Nichols make WOOLF after not getting MADIGAN'S MILLIONS and started casting THE GRADUATE in the time it took Pink to get MADIGAN made? Also, if you look on the Internet Movie Database you'll find someone thinks that Stanley Prager is a pseudonym for an Italian named Giorgio Gentili, even though they do list the American Stanley Prager as the director of numerous episodic TV shows - but not the director of his two Sidney Pink productions.]
Westinghouse got the undeserved benefit of Dustin Hoffman's name in their TV sales. A THOUSAND AND ONE NIGHTS was a successful film, but Jeff Cooper turned out to be a dud. I don't know how Mitch got so sold on him in the first place.
Now we only had two more films left to finish the first leg of our new WBC deal. Meanwhile Pack was chafing at the bit and wanted to know what our future plans and scripts were going to be. It was time for me to return to New York and request a release from our contract...
Pack's involvement might have been possible prior to the Dustin Hoffman decision, but now I was totally unable to even enter into discussions with him...
With Westinghouse and Dick Pack I was unable to play the role of businessman. In dealing with them I became what I never liked in anyone else, temperamental. It is weird that I was able to recognize the desease, know the cure, but be completely unable to accomplish the sane thing. Pride goeth before the loss of a lot of money and is the major asset of fools. In any event, I determined to get out of the contract and the Gettinger office set about doing it.
Our first overtures were rebuffed, and we were told we had a contract that we were expected to fulfill. Arnold [Kopelson] politely reminded the WBC executives that their contract was with a corporation and not with me personally. If they insisted, we could just walk away or sell our stock to some other producer, and they would be unable to enforce it anyhow. An angry Dick Pack replied that we would be very sorry if we carried through with our decision, but he eventually realized there was no way he could legally or otherwise force me to make any more films. He then became vindictive, agreeing to permit us to cancel our contract only if we gave him permission to re-edit the films and remove my name from them. I still don't know why he wanted to do that, but at that point, I was so disgusted that it became a matter of no importance to me, so we agreed. When I completed THE BANG-BANG KID and RAGAN, I was through with Westinghouse after delivering nineteen pictures in a little over two years.
Posted by William Connolly at 6:15 AM