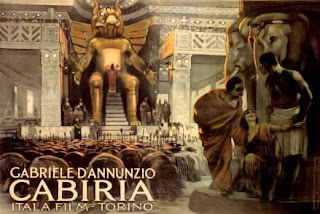 Domenico Paolella: The Maciste name was invented by (Gabriele) D'Annuzio for CABIRIA, from the Latin word "magis" (wizard) which nowadays might be expressed as "Er Piu" - "the most". (i.e. The Man!)
There was then a series of Maciste films, both in costume and contemporary settings. As a boy, I remember having seen an old Alpine Maciste in the first world war; he seized the Austrians in groups and dashed them against the mountain. Camerini had done a silent MACISTE CONTRO LO SCEICCO (MACISTE AGAINST THE SHEIK) that I have also remade. One of the first to make sense of this type of thing was (Pietro) Francisci, who had also made documentaries for INCOM. A nice, jovial man, who had a flair for this type of thing, and whose chubby euphoric face was adept at concealing the problems that came up. Then (Mario) Bava, who was a volcano - a one-man special effects department. In America the job that he did would have needed an entire corporation in a purpose-built skyscraper. With a piece of paper and a bag of tools he could create effects for STAR WARS.
Maciste was liked becausehe put in motion a mechanism which re-evaluated man - the unarmed individual; naked in a society of arrogant people, bad and armed. Maciste with only his muscles beats the armies. In the Western too, there is the one who makes justice with his fists, and even this is a form of rehabilitation of a man as the center of justice. I think that this mechanism can function in many ways, also because the story is very simple - always this: a girl, fallen into the clutches of the tyrant must be saved, and Maciste the saviour arrives with nothing and by chance comes across this situation. The fine thing is that he absolutely does not go to bed with the girl, nothing happens. It is difficult to find a real-life Maciste that takes care of a girl in this way. And that pure justice, the wandering rider, is a tradiational ancient theme.
My Maciste films were very serious. I took account of the mechanism, but I tried to make them in a style that made minimal demands on the audience. Putting aside even a pinch of irony that would show up the pretense. My adventures were not ever exaggerated, and I defined Maciste as a thinking being, at least to the same level as the audience.
They were not Maciste in a pure state. They were in a setting and ambience that was very believable, and with a little historical credibility thrown in.
They were exported a lot: they cost more than any other type of popular Italian film, but less than an equivalent American adventure film, and they struck it rich at the box-office. One of my films came to be sold in 56 foreign countries! They had an unbelievable export value.
[Mike Eustace comment: In CABIRIA, Maciste was a muscular negro slave, played by former Genoan dockworker Bartolomeo Pagano. Pagano continued to portray the character of Maciste in many other films which transcended time and place. MACISTE ALPINI, where Maciste was a member of the Italian Alphine troops in World War I is the film that Paolella is remembering seeing as a boy. The two "serious" Macistes that Paolella made were MACISTE CONTRO I MONGOLI (aka HERCULES AGAINST THE MONGOLS) and MACISTE NELL' INFERNO DI GENGHIS KHAN (aka HERCULES AGAINST THE BARBARIANS), both with Mark Forest. Note that outside Italy, the distributors had trouble with the name Maciste, and preferred to re-name him to something more familiar and pronounceable to their target audience, such as Hercules, Samson or Goliath.]
Posted by William Connolly at 7:56 AM