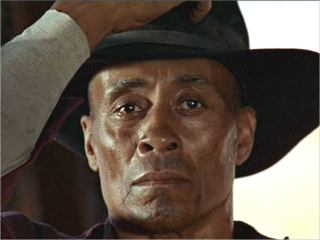 From: GOAL DUST
by Woody Strode and Sam Young
ONCE UPON A TIME IN THE WEST was the only picture I did for Sergio Leone, but he always gave me a good word of mouth, and that helped me alot in Italy. And he was quite fond of Luana, too. He called her Mama. One night at dinner, he said, "I need an Indian woman to be the scrub woman that runs out of the train station in the opening scene. Why don't you do it, Mama?" So if you ever see the picture, that woman was Luana. Sergio gave Luana a salary plus an extra thousand bucks when it was over.
The first time I saw the film was in Italy, in Italian. When the lights went down, I said to Luana, "Here we go, Mama." The scene with the water was a complete surprise. And the close-ups, I couldn't believe. I never got a close-up in Hollywood. Even in THE PROFESSIONALS I had only three close-ups in the entire picture. Sergio Leone framed me on the screen for five minutes. After it was over I said, "That's all I needed."
When I got home and I saw Papa Ford, I told him, "Papa, there's an Italian over there that just loves the West, and he's not going to do another western because they call them spaghetti westerns," I said, "Will you autograph a picture for him?"
Unfortunately, Sergio is dead today, but if you checked with his office, you'd find he has an autographed picture from John Ford. On the picture Ford wrote, "If there's anything I can do to help make Woody a star, I'll do it for free." Those are the little things that make those guys immortal.
Posted by William Connolly at 6:58 AM