The world changed for Sidney 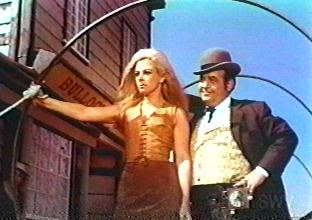 From: SO YOU WANT TO MAKE MOVIES
My Life As An Independent Film Producer
by Sidney Pink
The movie world was completely changing with whirlwind speed. All the rules and morals of filmmaking were tumbling down around our heads. The Swedes embarked upon their program of uninhibited sexual explicitness, and their two I AM CURIOUS films brought about a complete revolution in movie morality. I AM CURIOUS YELLOW brought to the first-run movie screens the first intimate close-up of the male penis. The shot in which a woman kissed and fondled it rocked the foundations of Hollywood. Since this was a foreign film and considered Art by the New York critics who screened it at the Little Carnegie Theatre, the courts were not interested in hearing any cases on its pornographic impact.
Thus the floodgates were opened, and the depiction of explicit sex and intimate close-ups became commonplace to the point of triteness. Little theatres off Broadway, like the World, that had struggled to stay alive as art theatres suddenly became the mecca for absolute pornography masked in the cloak of Art. Inexplicably, films like DEEP THROAT assumed the same mantle and were allowed to run for months.
Although I didn't realize it until much later, this singular change in attitude by the public was so widespread that pictures like THE BANG-BANG KID and other family movies were totally murdered. The rush was on to make movies more and more daring, with more and more four-letter words and holding back nothing, which culminated in even the biggest and most important stars baring their assets to public view. I never dreamed that Brando would show his bare behind to the world or that Julie Andrews would bare her bosom for all to see. That revolution of sex in the cinema came faster and dirtier than I could have imagined. But I didn't realize that until much later.
I still didn't have a director for RAGAN, and we were having real problems with THE BANG-BANG KID. By contract we had to deliver a first-class motion picture of not less than ninety-minute duration, and we couldn't find more than sixty-seven minutes in all of the footage shot. In the midst of this, Mitch and his family left Madrid for California where he was to work on his script at MGM. I hated to see him leave. Mitch made a lot of mistakes, but he was a very knowledgeable movie man and I would miss him.
My priority became getting a director for RAGAN so I could concentrate on THE BANG-BANG KID. I called Howard Berk to write some additional scenes to stretch the film, but they had to be without Tom Bosley, who had left for New York, or Guy Madison, whose whereabouts were unknown. Howard went to work, and I continued to search for a director.
Posted by William Connolly at 8:16 AM