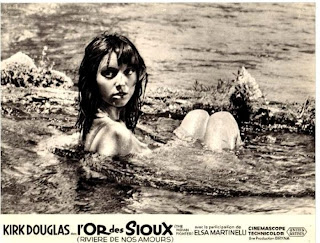 From: THE RAGMAN'S SON
by Kirk Douglas
I was very pleased with the cast we assembled for INDIAN FIGHTER, except for the lead of the Indian girl. We thought it would be easy to get somebody who fit the part. It was impossible. Every girl we auditioned seemed to be just some little starlet with a feather stuck on her head.
Then one day, Anne was looking through Vogue magazine. There was a shot of an Italian girl - long dark hair, dark eyes - coming up out of the water soaking wet, a man's shirt clinging to her voluptuous body. Anne said, "This girl would make a fantastic Indian." She did look terrific. We tracked her down - a model named Elsa Martinelli. She was in New York, just arrived from Rome. And she was going with Oleg Cassini. I had to laugh at the way Oleg kept popping in and out of my life. When I met Gene Tierney, she was just being divorced from Oleg. When I met Irene Wrightsman in Palm Springs, she was with Oleg. Now, I try to get Elsa Martinelli, and here's Oleg.
So I talked to Oleg. He said, "She hardly speaks any English, and that with a terrible Italian accent." I looked at her picture. She looked like a beautiful Indian girl to me. Besides, how does an Indian girl talk? Precisely what is an Indian accent, and how many people have ever heard a real one? And how bad could Elsa's accent be? I called her in New York, and told her who I was.
"No, no beeleeva you, no beeleeva you." She had just come back from seeing 20,000 LEAGUES UNDER THE SEA, and thought somebody was playing a joke on her.
I said, "Really, I am Kirk Douglas, and I want you to come out and test for a part in a movie I'm making."
"No, no. You no Keeka Doogalas."
I didn't know what the hell to do.
Then she had an idea. "You Keeka Doogalas, you singa da song inna da movie."
Over the telephone, I had to audition for Elsa Martinelli, three thousand miles away. I started to sing, " 'Gotta whale of a tale to tell you, lads.' "
Elsa started to shriek. "Dio mio! Keerka Doogalas! Keeka Doogalas!"
I arranged for her to come out to California to test. She was gorgeous and had a wonderful gamine quality that was perfect for the part. She had the potential to become a big star. I put her under contract to Bryna for several pictures. We gave her only about a page and a half of dialogue, never more than a couple of words at a time. She was a big hit in the picture, got a lot of publicity, including the cover of Life magazine.
People were after her. She was getting movie offers, became very impatient at the chance to make more money than I was paying her. I kept saying, "Elsa, if you are patient, I will make you a big star." I wanted her to play the female lead in a book I had just bought - SPARTACUS. But it was a big project, and would take time to set up. Elsa kept hounding me, saying I was holding her down because I had her under contract. Finally I thought, the hell with it. I said, "I don't make my money by putting people under contract. You're too much trouble. Here! You're free!" I tore up the contract.
After that, she did some bad pictures that went nowhere and did her no good. She was very unhappy, and realized that maybe I could help her with her career. She wanted to come back and be under contract to me.
I said, "O.K., Elsa, how much money are you going to pay me?"
"Whadda you mean?"
"How much money will you pay me if I put you under contract?"
She said, "No, no, no. You supposed to pay me."
"Oh no, Elsa. You're too much trouble. If you want me to put you under contract, you have to pay me."
And that was the end of my contract with Elsa Martinelli.
Posted by William Connolly at 6:11 PM