Sidney ends the deal with Westinghouse. 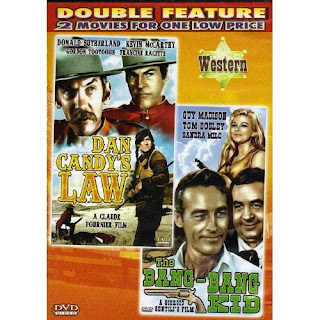 From: SO YOU WANT TO MAKE MOVIES
My Life As An Independent Film Producer
by Sidney Pink
Howard Berk was having a real problem with THE BANG-BANG KID. He was unable to find a place in the script for the additional footage we needed. No matter what I tried, it seemed that I was unable to bypass the use of either Tom or Guy. He was ready to give up, when I arrived at a solution.
In the original script, we talked about the gunslingers who had come to kill Kissick in response to the urgent ad in the paper placed by the mayor of Limerick. I suggested to Howard we could fill twenty minutes by showing different gunmen who answered the ad and took Kissick on only to meet their demise, culminating with an attempt to get rid of Kissick by means of an evangelist. Through the age-old trick of narration and a flashback to Bear Bullock's dream to bring a castle to Limerick, we were able to place all of the characters in medieval roles in the town of Limerick. Bear Bullock rides through the town in his kingly robes and visualizes a successful conquest of the fair maiden, making the time setting of the film temporarily unclear. It added comedy as well as needed flavor to the film footage.
We finished with eighty-eight minutes of action that came to the full ninety minutes when we added a second set of credits at the end of the picture. BANG-BANG KID and RAGAN were both excellent films that could find no market outside of television. By the time they were ready for release, the new wave of violence and sex had taken over, double features were doomed, and the market for these entertaining B-pictures was gone.
Today the pendulum is slowing swinging back, and audiences are once again appreciating funny and entertaining films that do not require nudity or profanity to make them palatable. Anyone who is lucky enough to catch THE BANG-BANG KID on the tube will enjoy a delightful comedy with inspired and funny performances by Tom Bosley and others.
We finished the last two pictures, delivered them to a hostile Westinghouse, and I prepared for my new career without any presold committments. Television needed pictures, the new wave of films were totally unfit for TV viewing under the existent taboos of the medium, so I was certain that for at least the immediate future we could profitably produce low-budget destined for television showing and foreign theatrical release. I returned to New York to talk with my friends and make new plans. An entire phase of my life had ended and the future was once again uncertain.
Posted by William Connolly at 6:03 AM