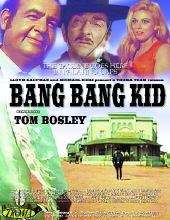 From: SO YOU WANT TO MAKE MOVIES
My Life As An Independent Film Producer
by Sidney Pink
THE BANG-BANG KID had already been cast with Guy Madison and Tom Bosley and would be directed by Stanley Prager. Again we had to use Italian actors to make up for the lack of Italian technicians. We chose a superative Italian actress, Sandra Milo, who was a Fellini star and well liked in her native land. She was a very pretty, buxom blonde with unquestionable talent, but she had absolutely no interest in doing her part in English.
Since Stanley was unable to communicate with her, I hired a special interpreter who did nothing but communicate to Sandra exactly what the director wanted her to do. For the part of Killer Kissick, we used Riccardo Garrone (who played the Mafia chief in MADIGAN), and he made Killer Kissick a most formidable caricature of all the bad men in Western history. Some of those Italian actors, like Riccardo, were remarkably talented, and I often wished that they could have spoken English; life would have been so much simpler.
THE BANG-BANG KID was almost director-proof. Tom Bosley had studied his role so well he needed no help from anyone. Since the robot dummy was to be his double, we made up plastic masks that allowed one of our stunt men to appear in those scenes where Tom was tinkering with the robot. The rest of the time, Tom played the robot as well as himself and he was great. THE BANG-BANG KID was a good script and was emerging as a funny picture.
With no cast or production problems, Stanley did not discern that he was not directing the picture. I was constantly on the set and unobtrusively rehearsing the actors in order to give him the time to work with the camera crew and set up his shots. The combination of Bosley, Madison, and that excellent cast worked magic, and we were getting excited about the film's potential. The picture finished one full week ahead of schedule and I couldn't understand why. We shot every page of the script in less time than that allotted by our production chief. We were, of course, pleased with the savings and went into editing. I thanked Stanley and sent him home early.
Meanwhile I was frantically trying to find a director for RAGAN. I was not about to do it myself, and I refused to use any of the available Italian and Spanish directors. Ty Hardin was in town enjoying himself at our expense and was in no hurry to go to work, so I looked around for someone who knew the American tempo.
Posted by William Connolly at 8:31 AM