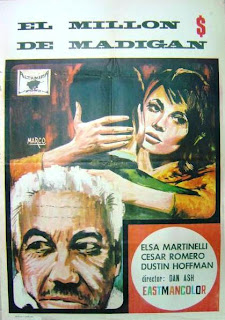 From: SO YOU WANT TO MAKE MOVIES
My Life As An Independent Film Producer
by Sidney Pink
I returned to Madrid with all pictures cast, all production preparations in the works, and determined I was through with Westinghouse. Dick Pack was obviously aware I was up to something by the deaf ear I turned to his suggestions and my refusal to return his calls. Jay Shears told him I was making no further plans beyond RAGAN, the last script and cast approved by them. Mitch was receiving daily calls from Dick pleading to be told what we were up to, but to protect Mitch, I kept him in the dark about my future plans.
Mitch informed me he was on the verge of a deal with MGM who would advance the money to develop a script on AUGIE MARCH. He met a young director he felt had the sensitivity to bring the novel to the screen, and he would most likely not stay with us until the last picture of our present schedule was completed. He requested two weeks off to go to L.A. and discuss the deal with MGM and to conclude something with that talented young director, Stephen Spielberg. I agreed, offering to pay for his trip if he could find a promising leading man for A THOUSAND AND ONE NIGHTS.
[Of course, the talented young director is usually known as Steven Spielberg.]
Using our Italian company Domino Films as the official producer, we prepared a five-week shooting schedule for MADIGAN'S MILLIONS in Rome and hired a completely Italian crew with the exception of Macasoli, who was director of photography (the fancy new title the guild had dreamed up for the cameraman). We required a scratch track in sync with the film to make our dubbing job more acceptable. Most Italian actors couldn't speak English, so if we didn't have a soundtrack to guide us, we could never accomplish the quality demanded by American and British audiences. We spent five weeks fruitlessly trying to teach an Italian crew to stay silent while we were shooting, but we did manage to record enough to accomplish the job.
We brought Dustin to Madrid first to establish how the main character should be played, and it didn't take long to find out how unpleasant Dustin was to work with. I wish I could say nice things about him, but in our midst he was nothing but a pain: loud, constantly complaining, and always ready to pick a fight with Stanley Prager, whom he considered totally incompetent. Most of the crew considered Dustin obnoxious, and although they recognized his undeniable talent, his attitude often got in the way...
Those five weeks were pure misery. I had to remain close by every day in order to make certain there would be no repeat of the fracas I had seen develop. We had some very good Italian actors on the set, including Riccardo Garrone who played a comedy gangster in real style, and he was a joy to watch. His scenes with Dustin were truly funny, the only bright spots in what should have been a fun picture.
We were unable to get a date from George Raft when he would be available to shoot his part... The sequence could easily be shot in two mornings, but not without George Raft.
There must be some truth in the axiom that the good Lord keeps an eye on children, drunks, and fools, because I found my way out only after the gloom of despair had almost turned me into gelatin. I was pondering a sudden exile to China when I suddenly remembered I had a friend in Hollywood who could possibly get us out of this mess. Cesar Romero had told me that if I ever needed him and he was available, I could count on him.
My urgent plea for help on a desperate long-distance phone call gave Cesar the opportunity to prove again what a compassionate and warm human being is. He was the savior for my "sick flick". Cesar agreed to do it and didn't even ask, "How much?" He came to Rome on a weekend and did such a marvelous job that his performance stands out as the highlight of an otherwise lackluster picture. It proves that a man is judged by his deeds and not his doubts. This is why to this very day, Cesar Romero (now nearly eighty) is still very popular and still working; his class stands out as a beacon for others to follow.
The difference between Cesar Romero and the Dustin Hoffman we knew was as stark as black versus white. The memories Dustin left with us were sick and sorry.
Posted by William Connolly at 6:04 AM