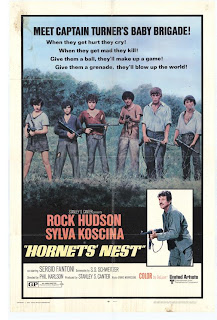 From: ROCK HUDSON HIS STORY
by Rock Hudson and Sara Davidson
Rock came home for a few months [after making THE UNDEFEATED in Durango, Mexico with John Wayne] and then went to Italy to make an action adventure picture, THE HORNET'S NEST, with Sylva Koscina. He had been told Sophia Loren would be his co-star; Koscina had been substituted at the last minute. Rock wrote Jack funny letters. "This is my new Italian secretary (actually she is a portable Olivetti). She doesn't spell very well and you have to press her kind of hard, but she's a faithful girl." Rock wrote that he had a good feeling about the film and that one of the young boys in the cast was a "great natural talent". Rock was never able to tell, while shooting a picture, whether it was working, but in the process of investing himself in the character, he became emotionally involved, and inevitably he was infused with hope.
More often than not, he was disappointed, as he was with THE HORNET'S NEST. Rock returned to the Castle in time for Christmas, and his concerns with career and business fell away.
Posted by William Connolly at 10:54 AM