The director of HATE FOR HATE 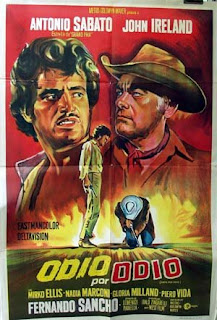 Domenico Paolella: ODIO PER ODIO (HATE FOR HATE) was a Western in its settings and situations and costumes/conventions. But it was really a melodrama, a film made from a complicated story that followed pretty closely a classic melodramatic plotline, a story of passions, emotions, revenge. Instead of bending the genre out of shape (one could alternatively do a purist Western, but I seriously doubt Italians have it in them to do it this way!), it helped the film. I preferred the formula of contaminating the Western with something more in our traditions: the serial and the melodrama. HATE FOR HATE is a tale out of the serials made more dynamic by being transported into a Western setting. The experiment was openly declared by me, so much so that the producer, Italo Zingarelli, proposed a script to me on which he had some doubts and modifying it in a Western direction. This became HATE FOR HATE, whose success allowed, among other things, the debut of Enzo Barboni and the Trinity movies. We shot the film in Catalonia with Antonio Sabato, a young actor who I've seen since in only a bit role in Grand Prix, and with John Ireland, who had made many true Westerns. It did huge box office business, and – honestly - I had made it believing in it.
The other one was EXECUTION. It was an Israeli co-production, and we shot the exteriors in Israel, in the desert. It was a film against war, against violence, and it rested on the story of two friends, which was still a fairly novel idea. Only later was it in run into the ground, and turned into a cliché. One of the pair dies from a shot meant for the other. And in the finale the surviving one of the pair literally hangs up his guns on the grave of his friend. John Richardson, today a successful actor of television movies in the US, was English by origin, a very trained actor, very restrained in his readings. Well, my Westerns were very different from those of my colleagues and friends, who have drawn from the genre the most they could, with the greatest intelligence.
Posted by William Connolly at 5:57 AM