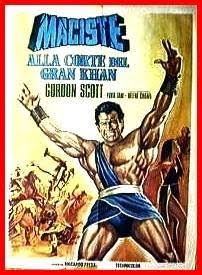 Riccardo Freda: The series was not launched by me, but it was I that gave it a resolute tone. The audience loved the type of superman embodied by Hercules and Maciste. Unconsciously they were also loved, because in the final analysis you want to deal with a strong or bold or brave hero, with which the public can identify, for all those who dream of proving themselves a superman in front of a woman. The love interest had an importance that had great relevance, because it dealt with a love that was romantic and touching. The sadistic side of love was nonexistent.
There was instead simply adventure for the sake of adventure. For MACISTE ALLA CORTE DEL GRAN KHAN (SAMSON AND THE SEVEN MIRACLES OF THE WORLD) I was able to do the earthquake of Peking in a meadow on the outskirts of Rome. I really enjoyed shooting it and it gave me great satisfaction to see the footage in projection, because it seemed as if it was the real Peking that came crashing to the ground.
Posted by William Connolly at 6:52 AM