Sergio Corbucci on his Westerns 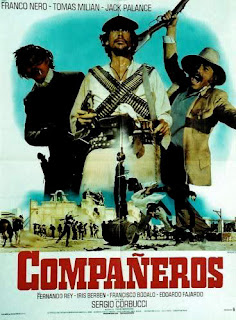 Sergio Corbucci: Let's take it once more from the top: on principle, I shot a series of three Westerns in what one can call, alternatively, a Japanese or a Noir style. Then slowly, very slowly, the political content started to emerge in the the three, and I then made a sort of trilogy about the Mexican Revolution: IL MERCENARIO, VAMOS A MATAR COMPANEROS and CHE C'ENTRIAMO NOI CON LA RIVOLUZIONE? I was drawn to Mexico for two reasons. First of all because I've always liked the history of the revolution, and then because of the fact that our films were called "Spaghetti Westerns". That bothered me, as well as Leone, Tessari, Sollima... This label came from abroad, where John Ford himself had coined it in regard to my films and Leone's which seemed to him to be trespassing on American territory - as if they hadn't done their fake papier-mache version of Ancient Rome with their various BEN-HURs! - And because here our critics regularly referred to them as imitations of the American Westerns. We wouldn't tolerate this, because our Westerns don't resemble theirs at all, we subverted the rules to such a point that the Americans started imitating us, with dusters and stubbly beards, the violence, guts dribbling out... All these aspects, and the fact that Spain, where we shot, was much closer to Mexico than to Texas, led me to embark on the "Revolutionary Mexican" genre, a truly inexhaustible source.
[I'm certain that Corbucci would like to think that John Ford saw his movies, but it is wrong to believe that John Ford coined the phrase "Spaghetti Westerns". In Woody Strode's book GOAL DUST, Woody talked to Ford about working with Leone and Ford seemed to be unaware of the Italian's movies. But as Woody liked Leone, Ford wrote the Italian a note of encouragement.]
Posted by William Connolly at 7:10 AM