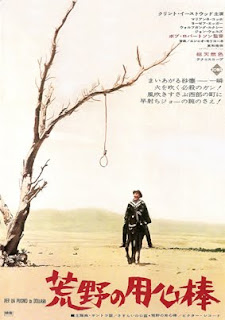 From: Answers At San Francisco
Were Somewhat Better Than The Usual
Publicity-Shrewd Pap
by Cathy Furniss
Films In Review Vol. XXII No. 10
December 1971
[A report on the 1971 San Francisco Film Festival]
The violence in every film, old and new, shown at this year's San Francisco Film Festival, was hissed and booed, as were lines of dialog, when spoken by a woman to a man, like "Life means nothing to me without you."...
Serious cinemaddicts may wonder why the Festival staged a Clint Eastwood retro. Well, it did, and it consisted of clips from A FISTFUL OF DOLLARS; FOR A FEW DOLLARS MORE; THE GOOD, THE BAD AND THE UGLY; COOGAN'S BLUFF; THE BEGUILED; PAINT YOUR WAGON; DIRTY HARRY; and PLAY MISTY FOR ME. The violence and Establishment-aura in the latter were especially booed. But during question-period the audience treated Eastwood with respect. At his press conference he was unjustly regarded as a hick.
Asked where he had learned to sing he replied with a smile: "In the bathroom." To an assertion that PLAY MISTY FOR ME looked as though it had had two directors, he said he wished it had because "I could have used another person's help." He was similarly forthright, and modest, in most of his replies. He said he had not had a stand-in nor been injured in the violent scenes, especially the billiard-parlor scene, in COOGAN'S BLUFF, and added that Don Siegel is "the best director I've ever worked with." Siegel, incidentally, plays a bartender in PLAY MISTY FOR ME, which Eastwood directed.
He said A FISTFUL OF DOLLARS was definitely a re-make of Kurosawa's YOJIMBO. To "Are you aware your films are oppressive to women" he side-stepped with: "I'm stuck for an answer." On the subject of violence in his films he said: "There are a lot of ways to look at violence in films. I don't think violence makes a film successful." Nevertheless, he thought he'd prefer less violence and "if I could tone it down I would."
Posted by William Connolly at 9:31 PM