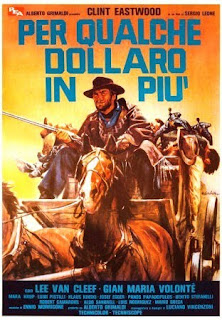 From: His Name Is Chuck 4
Interview by William Connolly and Tom Betts on April 1, 1990
Spaghetti Cinema #59, December 1994
Gordon Mitchell: I remember when Clint Eastwood made his first Western with Sergio Leone. People have no idea; he worked for nothing on that film. He was probably getting 3 or 4 thousand dollars a week. But after that, he just went up and up.
You saw FOR A FEW DOLLARS MORE, didn't you? Did you look at it real well at the beginning of it? They shot that twice after they got a bit more money. You see where he comes in at the very beginning of the film, they have it raining. He's sopping wet. Then you see him walk in dry as a bone into the saloon. And then when he rides away, that street's a dusty as can be. They got a little extra money to do that first scene.
I mean that's just one of the things.
People never really pay any attention to it.
Posted by William Connolly at 10:35 PM