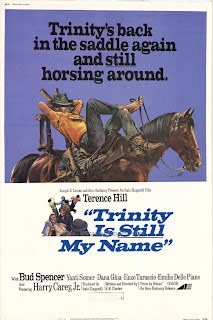 Enzo Barboni: Having been a director of photography for so many years, I thought producers might be a bit resistant to seeing me as a director and I changed my name to E.B. Clucher. Clucher was my mother's maiden name, a "lanzquenet" name originally, I believe. I decided this at the very last moment - only Zingarelli and I knew about it. And so when the film was released they all asked who this Clucher was.
It's been a lucky charm for me that I wouldn't part with for the world.
The team of Bud Spencer-Terence Hill had been formed for a film by Giuseppe Colizzi, which had done good commerical business but hadn't taken off like THEY CALL ME TRINITY. Ten years later, they're still together with many successes behind them. They have no problems as a team: one lives in Rome, the other in the States, and they only meet up for the films. I believe Terence Hill is an American citizen by now, he married an American, has two kids, and lives there full time. I think they do one film a year together, and otherwise have separate careers.
There isn't a dominant person in the pair, they complement each other, each with his own individuality, so much so that they've done many films apart, though without the success they enjoy as a team.
Bud Spencer has always stayed close to the conception of the character from the first films, whereas Hill has tried to change his a little. Bud is a bit infantile, completely instinctive, not very intelligent: the other is a bit aggressive, without being nasty. Naughtier. Pedersoli dedicated his life to sports, then he did something in a production capacity and he became acquainted with, and wed, the daughter of Peppino Amato. He's one of those who gives his all; a great fellow. With me, and I think with others, he's very attentive, very respectful of the director's ideas, which I always discuss ahead of time with the actors, and once accepted there are no problems. I try and involve myself with every part of the system: producers, distributors, actors. I prefer to start only when everyone believes in it and is in agreement. If the film goes well, they can share the responsibility, and likewise if it fails - if it doesn't hit the mark.
Posted by William Connolly at 6:21 AM