Gordon Mitchell on FOUR FOR ALL 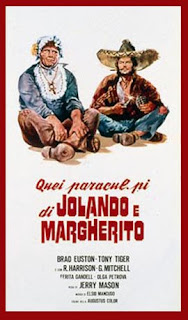 From: His Name Is Chuck 4
Interview by William Connolly and Tom Betts on April 1, 1990
Spaghetti Cinema #59, December 1994
WC: The film you did in Turkey with Richard Harrison; FOUR FOR ALL...
Gordon Mitchell: We did all fights in that...
And that one there, I tore my leg up in a chase scene. We're doing a chase scene on the street... We just had to hide the camera truck.
I'm chasing this other guy fromt he sauna in a big towel and it's snowing. It's below zero.
They would set the camera up and wave to us and we'd go running through the crowds. Now you do that for two or three hours...
And I put tape on the bottom of my feet because it was just killing me.
And the last part. It was about four o'clock in the afternoon. And so he, the director, said, "Okay, this last one now, you got to really speed up and catch him."
And then you see me running and running and all of a sudden a "pop". It just tore. So, for the rest of the film, I'm limping around in there.
WC: Do you remember who directed that film?
GM: It was a Turkish director, but Richard and I, most of the time, were doing the directing. That's what happens with these films, you have no idea.
Richard... The first day he put me in a sauna and I'm fighting four of these Turkish men. And then Richard said, "Why don't you bounce his head some more?"
I said, "Richard, we're 17 hours... I've lost five pounds in there."
And I can't speak Turkish; they can't understand English. I'm doing hard work trying to explain to these guys how to do... you know, 'cause Turkish boys are real tough guys, to make a good fight scene, I had to go through all the talking trying to explain to them and all that.
So, Richard said, "Bounce him."
And I said, "Richard, I've been here 17 hours, and you're in a hotel room in a nice warm bed. I'm trying to direct the thing and fight..." 17 hours.
WC: Do you remember much about Tony Tiger?
GM: That's Irfan Atasoy. He was the producer of the film; he co-produced it.
TB: And he acted under the name Tony Tiger?
WC: He looked like he was trying to be a Turkish Bruce Lee.
GM: Oh, and Richard had a thing to deal with him.

[An Italian distributor named Giulio Giuseppe Negri bought this Turkish production, retitled it QUEI PARACUL... PI DI JOLANDO E MARGHERITO and slapped the name Jerry Mason on it to take writing and directing credit. He then put out a poster to make it look like a Western. A Turkish blog credits the director as Yilmaz Atadeniz.]
Posted by William Connolly at 10:28 AM