Lino Ventura appraised in 1972 by an American 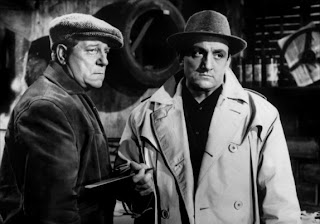 Jean Gabin and Lino Ventura in 1957's LE ROUGE EST MIS, a film I've not seen and greatly want to.

From: FILMS IN REVIEW
April 1972, Vol. XXIII No. 4
"Films On TV" by Jack Edmund Nolan
In the last decade so many US "art houses" have turned to out-n-out pornography that television has become the only means whereby those who study run-of-the-mill foreign films can continue to do so. It's not an idle hobby. I have found foreign programmers a rather good way to learn what the non-US masses - to use a now almost obsolete word - are being fed.
I grant you have to look at some horrible dreck - the snobs who say "I like foreign films" should see some of it - but there are compensations (in addition to serious sociological and political ones). One compensation is watching the waxing and waning of the careers of players who are stars in Europe but haven't yet or may never, become such here.
Of late, I've been following, on the miniscreen, the career of Lino Ventura who, in the last decade, has never rated lower than eighth among France's top boxoffice draws. Thirty-four of his 57 theafilms he's appeared in have been shown on US-tv, where more than half of the 34 have had their US premiere. The French regard Ventura as a new purveyor of the image Gabin exploited so successfully, despite the fact that he is not nearly as handsome.
Ventura's real name is Angelo Borrini and he was born in Parma, Italy, on 7.14.19 His publicity claims that his father's "trade unionism" caused the family to escape from Mussolini's fascism in the '20s by emigrating to France. Those who are not part of Ventura's claque say the family went to France because farm-laborers were needed there. Whatever the truth may have been, Ventura worked for some years in France as a professional boxer.
He was becoming a bit portly when, in the summer of '53, director Jacques Becker, on the look-out for types who could personify gangsters, gave him a part as one of the hoods in TOUCHEZ PAS AU GRISBI (called in the US both PARIS UNDERWORLD and GRISBI). A big boxofficer throughout Europe, it gave Ventura grade-A exposure. It was Becker, incidentally, who changed Ventura's name.
He played gangsters in three of his next four films (BAZZIA SUR LA CHNOUF; LA LOI DES RUES; LE FEU AUX POUDRES) but in CRIME ET CHATIMENT ('56), which in the US was called THE MOST DANGEROUS SIN, he played a most phlegmatic bartender. In the next three years he appeared in some 17 French-made theafilms, most of which can be seen on US-tv. He is merely a French secret agent in four of them (US titles; ACTION IMMEDIATE; OPERATION COPLAN; GREETINGS FROM THE GORILLA; THE TIGER ATTACKS) but in the Gabin-starrer called MAIGRET TEND UN PIEGE (US: INSPECTOR MAIGRET) he is Inspector Torrence, the Simenon character who pretends to type reports while Maigret is shouting at a murderer who professes innocence.
In five of the 17 films Ventura made between the fall of '56 and the fall of '59 he had good, dramatic roles, and three of them accounted for his becoming a European star: MONTPARNASSE 19 (US: HERO OF MONTPARNASSE), in which he is the merchant who witnesses Modi's death; SURSIS POUR UN VIVANT, in which he is the director of the Edelweiss Hotel; and Duvivier's neglected masterpiece, MARIE-OCTOBRE, in which he is the ex-maqui turned bar owner.
In the rest of the 17 he is a crook - and this fact is not without its significance in appraising the reasons for his success (and in understanding contemporary Europe). He is the second-in-command gangster in LE ROUGE EST MIS (US: SPEAKING OF MURDER) whose semi-cowardice Gabin flushes out. He is a hunted suspect, rather than an actual evil-doer, in several pictures. And in director Claude Sautet's CLASSE TOUS RISQUES he has his first really big role (an aging, dissolute gunman on his own, except for the wife and children he has to take with him as he tries to elude the law, who seeks a solitary death and is dealt the final blow before a crowd of onlookers.)
Ventura was then 40 years old and he had enough showbiz savy to begin insisting on "good guy" parts. He played one in William Dieterle's DIE HERRIN DER WELT (US: MISTRESS OF THE WORLD); is a stubborn, but admirable French soldier in UN TAXI FOR TOBRUK; a shrewd, resourceful maqui in L'ARMEE DES OMBRES; an anti-evil proletarian in several films (LE BATEAU D'EMILE; LES GRANDES GUEULES; LES AVENTURIERS); and an honest cop or secret agent in several others, most notably in LE CLAN DES SICILIENS (US: THE SICILIAN CLAN). The gangster roles he accepted usually had the racketeer be retired. In two such roles - Alphonse in LE MATAMORPHOSE DES CLOPORTES ('65) and Gu Menda in LE DEUXIEME SOUFFLE - he is so good the reasons for his European reclame are obvious.
His success, some say, went to his head, and early in the '60s he began showing up on a set hours late, and began being replaced. Jean-Paul Belmondo replaced him in UN NOMME LA ROCCA; he was supposed to be police chief Brown in the '63 DIE DREIGROSCHENOPER but is not in that role in the print I saw; and ONT-ILS DES JAMBES, on which he worked in '64, has not, to my knowledge, ever been screened publicly.
Whatever went wrong was overcome, and since '70 he's been in eight films. I've seen only the first two, but they're near masterpieces. In the first, DERNIER DOMICILE CONNU, based on Joseph Harrington's fine '65 novel, he is an avenging cop endeavoring to follow the scent on a very cold trail, and in the second, the surrealistic FANTASIA CHEZ LA LES PLOUCS, he is a swindler in Las Vegas - and other places.
Parts of some Ventura pictures have been shot in the US but it will not be until THE VALACHI PAPERS is released that we will see him in a US-made film (he will play Vito Genovese).
An English friends tells me he has a luxurious home in France - and that it's always guarded.
Posted by William Connolly at 10:24 AM