Enzo Barboni on why no more Westerns. 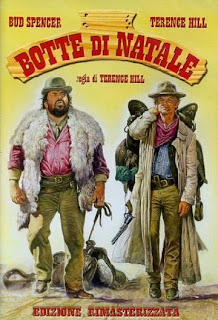 Enzo Barboni: It has always seemed to me that there's no need to keep going for the gold. It's also risky. So I only did the first two comic Westerns, and then I did something different. I believe in moving on from a genre at the proper moment, even it other then follow and do excellent business. But when Zingarelli and I did the Trinity series, they weren't even making Westerns anymore. Times change, other things come along. Who can believe in a gunslinger on horseback anymore, when a purse-snatcher on his Vespa motor scooter does things Jesse James wouldn't have dared? Your average thief on his motorbike does acrobatics that would make a poor horse's head spin. When I did the second Trinity - there was a gag that a friend wryly responded to: "Well, if a fanatic on horseback can do that, what would I do with 218 horsepower in my engine?"
The motorcycle has definitely replaced the horse.
[Of course, Barboni did make a third Western. After negotiations with Terence Hill and Bud Spencer to make a third Trinity film in 1995 fell through, Barboni made TRINITA & BAMBINO... E ADESSO TOCCA A NOI, aka SONS OF TRINITY. Hill and Spencer made BOTTE DI NATALE, aka THE FIGHT BEFORE CHRISTMAS, aka THE TROUBLEMAKERS, as Travis and Moses.]
Posted by William Connolly at 10:01 PM