Gordon Mitchell on cheating for the camera 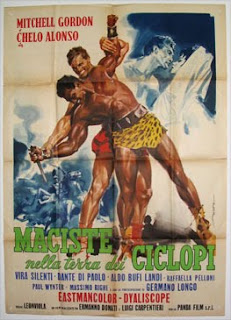 From: His Name Is Chuck 4
Interview by William Connolly and Tom Betts on April 1, 1990
Spaghetti Cinema #59, December 1994
Gordon Mitchell: When you watch MACISTE NELLA TERRA DEI CICLOPI (U.S. title: ATLAS IN THE LAND OF THE CYCLOPS), Paul Wynter - all the time through the whole film, there's not one dagger on him. And then, the scene at the end of the film, all of a sudden, I turn my back and he pulls a dagger out of his thing. I mentioned it to the director, and he said, "Forget it. They'll never notice."
But, I'll tell you. On some of these films things like that happen. You jump off a horse, and the next day they can't get that horse, so you get another horse. Alot of times for director Demofilo Fidani, to help him... Like I escape on my horse, and he needed some more people to make the band following me a little bit bigger, so I'd put a Mexican hat on and I'd ride after myself.
I mean if you talk to people they have no idea of the crazy things... especially when you did low-budget films, because you really had to really help as much as you can. Alot of times you even help the cameraman, or help set the lights up on some films for some buddies of mine. Help set the lights, help with the camera, set up the fight scenes and do it, and then change two or three times your clothes.
Posted by William Connolly at 6:12 AM