Sergio Corbucci on DUEL OF THE TITANS 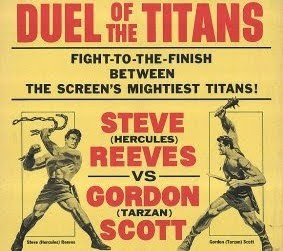 From: Cine Zine Zone #50
Interview by Carlo Piazza, May 1989
Translated into French by Pierre Charles and then translated into English by Arcides Gonzales
Sergio Corbucci: Seeing it again, I wonder how I was able to do such a film, in the sense that today it wouldn't be possible to do it again. Not for financial reasons, as people think, but rather for technical reasons.
This film, received bad reviews at the time. Critics said that it resembled a Western; that the actors brandished the sword as if it were a gun.
CP: Yes, but at the time you stated, "I am shooting a Western."
SC: Well, true. Several sequences are really Western in style. The final scene, for example, when the Sabines appear high above like the Indians in a Western, is a Fordian reminiscence. The American Western was too important for our generation. We make them even when we don't want to.
As for ROMULUS AND REMUS, I have to say that I never had so many beautiful people at my disposal for a film: Reeves, Scott, Girotti, Sernas, Virna Lisi and Orenella Vanoni.
Posted by William Connolly at 10:46 PM