Sergio Corbucci on the end of the Italian Western 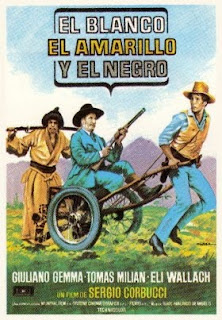 Sergio Corbucci: There was also the fact that the Italian Western, which had opened many doors overseas where the films sold like hotcakes, had gradually declined in quality with paler and pale imitations. My own DJANGO had had cousins, uncles and relatives aplenty. The overuse of his name crippled everything; there were who knows how many of them shot each week. And so the genre dies, partly due to Barboni's mocking shot at the heart, partly through over saturation. Pity, because this type of film could have been an excellent training ground for young directors, and might have continued as a moneymaking genre if done well. It is for these reasons that those of us present at its birth finally abandoned it. Since then, I've moved on to comedy, and I don't think I've done a single dramatic film since. Since then, I haven't killed off a single protagonist.
Directors like Antonioni, Rosi, Petri ought to be grateful to the Western. Having made their heaps of money (from us), the producers could then redistribute a bit of the cash to the more "serious" directors. At that time, producers knew that they could produce a couple of Westerns and make a killing overseas, something that wouldn't be easily done with, say, Italian comedies which didn't travel well, nor even the Italian political films, because their concerns were too peculiarly our own. The economic crisis of Italian cinema pretty much coincided with the decline of the Western, really because there was no longer this production structure which could bring work to huge numbers of people, and unloose a sea of money. Bud Spencer and Terence Hill, themselves, who are still at it, continue to do things that derive from the Westerns, even if they're playing policemen, and have become American citizens.
Posted by William Connolly at 6:54 AM