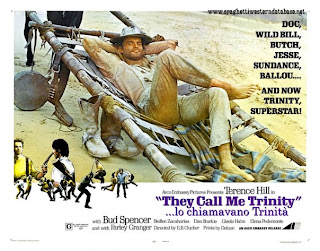 Enzo Barboni: I have various producers read the script of TRINITY... and many of them, leafing through their copy, noted that the right half - with the dialogue - was unusually full, to which they'd respond: "He talks too much and shoots too little."
Until one day I spoke about the project with Zingarelli. He'd already done some producing, and he read it attentively, rapping a paperweight rhythmically on his desk as was his habit, and then he called me and said, "Let's make the film!"
Wisely, he didn't say, "The director is inexperienced, let's do this cheaply." He said, instead, "Let's try and make a good film and get it right."
Those were difficult times - Westerns were doing badly, and yet he invested good money without imposing his own ideas, allowing me to do what I wished.
Zingarelli's one of those who has always been in movies, he popped out of a movie camera at birth. He started out as a cascatore as a young man. He's a big cordial man, a little dogmatic in his judgments, but sharp; brilliant. I'm happy things went well. THEY CALL ME TRINITY cost 400,000 million lire, and brought in six to seven billion back then, with tickets still 1200 lire. It had such a big success in Italy, that other countries were intrigued, and it did nearly as well in Germany.
Posted by William Connolly at 9:18 AM