Gordon Mitchell on the strain of shooting 7X7. 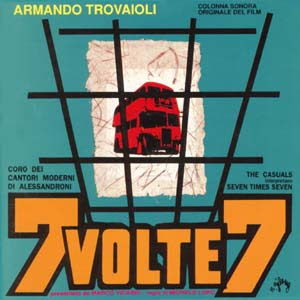 From: His Name Is Chuck 4
Interview by William Connolly and Tom Betts on April 1, 1990
Spaghetti Cinema #59, December 1994
Gordon Mitchell: And then on SEVEN TIMES SEVEN I got hurt alot. They were breaking stuff over my back, when I'm nude. And the big fight scene on cement. I could only do it once and it took two days to heal-up afterwards.
People just don't realise the things that you do.
And then like we were shooting 24 hours straight-through.
In the last scene we did, Michele Lupo says, "I want a close-up of you now."
WC: Always at the end.
GM: I know. Things like this - like that happen, and you know, what do you want to say? We had been up about 30 hours straight without stopping. We had to finish because Monday they had to come into the big mill.
Posted by William Connolly at 10:02 AM