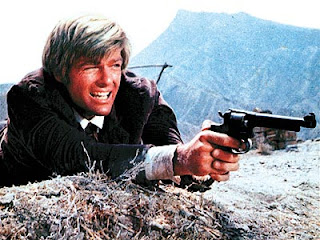 From: COMRADE ROCKSTAR
The Search For Dean Reed
by Reggie Nadelson
In Moscow, after the peace conference at Helsinki, Dean arranged to interview Valentina Tereshkova for Argentine television. The first Soviet woman in space, she would not kiss Dean and was embarrassed. Back in Buenos Aires, where he was then living, Dean was questioned by the police and, when the military took over the country - the sequence of South America coups is always hard to keep up with - he was expelled. In 1966, still married to Patty, he went to live in Madrid, made a couple of pictures, and moved on to Rome.
For the next half dozen years, Dean commuted between South America and Europe and the Soviet Union. Deported from Argentina, threatened by the Right, he tried to get in again by travelling to Uruguay. He was arrested. The the world who knew him, he had the glamour of a political cowboy, moving faster and faster, and he wrote it down in his autobiography that was printed on the crappy paper. So did the FBI and the State Department. It took two years for Dean's file to arrive on my desk, courtesy of the Freedom of Information Act. But when it did, the account of his exploits in South America, was, so far as I could tell, absolutly accurate.
After an illegal entry, a policeman in Uruguay, who had previously arranged his deportation, recognized him. 'Hello, Dean, I always suspected we would meet again,' said the policeman.
By 1967, Dean was living in Rome where he made Spaghetti Westerns (This wasn't a life, it was a mini-series!). He made eight altogether: in 1967, there was BUCKAROO; in 1968, 20 STEPS TO DEATH, THE THREE FLOWERS and ADIOS, SABATA. In 1969 came DEATH KNOCKS TWICE, PIRATES OF GREEN ISLAND and my favourite, MACHING GUN BABY FACE.
Sometimes, late at night, you could still catch ADIOS, SABATA on television. In it, Dean worked with Yul Brynner. Dean was taller than Yul, but Yul was the star. Dean played their scenes standing in a hole on the beach that had actually been specially dug for him. Dean told the story for the laughs, but it clearly got up his nose that he was less important than Yul.
When Dean went to Santa Domingo to get the divorce from Patty, he laughingly told the press about how he was taller than Yul. Next thing he knew, he saw a story in the paper that Yul had arrived in Santa Domingo.
And in 1970, when Dean applied for a new passport - his old one had expired - his height was listed not as six foot one, as it was on his original document, but as six foot four, but then, by 1970, perhaps Dean felt he had grown taller.
Posted by William Connolly at 7:04 AM